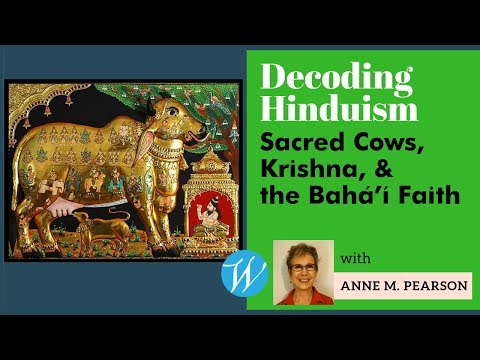 The numerically largest Bahá’í community in the world resides in India, and most of those Bahá’ís come from a Hindu background. Bahá’ís readily acknowledge Hinduism as one of the great religions, and identify Krishna as one of the “Manifestations of God”. Yet, generally speaking, Bahá’ís outside of India know little about this religion, and very little about Krishna. They are not alone. Most non-Hindus may be able to evoke a few common perceptions, such as: Hindus believe in many gods; cows are sacred for Hindus; and they believe in reincarnation and are vegetarians, right? Yet, otherwise, they have little knowledge of this religion.

This talk aims to “decode” elements of what constitutes “Hinduism,” an ancient and vastly complex religion, to address these perceptions and to examine points of convergence and divergence between Hinduism and the teachings of the Bahá’í Faith. More specifically, I will examine the following questions:

The talk will end with an overview of the history of the Bahá’í Faith in South Asia, including the Bahá’í House of Worship in New Delhi, now one of the most visited sites in India.

I have been fascinated by religion, its histories and cultures, since I was a teenager living in India. This interest led me to undertake extensive travelling and eventually to graduate work in religious studies, with a special focus on Hinduism and women. As a student, I also encountered and joined the Bahá’í Faith. Over the years, I have greatly enjoyed helping students learn, and have taught a wide variety of courses in the field of religious studies. At the same time, I have been interested in issues of social justice and equity, nonviolence and conflict resolution, as well as interfaith dialogue, and so have been involved, often in a leadership role, with many community organizations that address these issues. Listen to Anne’s interview on ‘A Bahá’í Perspective’ podcastSee Faculty Bio