Trip Barthel on “Creativity in Consultation” 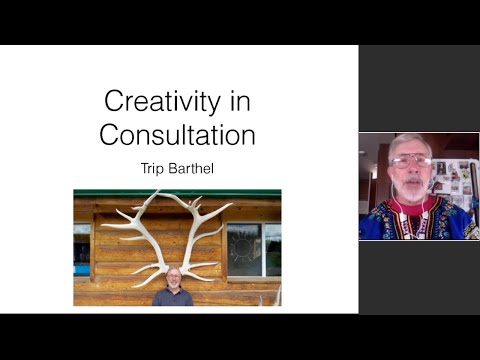 When Trip Barthel gave his Wilmette Institute Web Talk (he called it a Web Shop) on “Creativity in Consultation” on June 5, he opened by saying that he was going to talk about the Bahá’í writings on and the science of creativity and that he would provide some very practical ways of bringing creativity in consultation. Then he followed with the provocative assertion that, when nine people sit around a table, we are not at our most creative. Sometimes, he said, we tend to imitate practices in the world around us. He promised that his Web Shop would include several opportunities to respond to activities and that his listeners would leave with practical ideas and activities.

Introduction. Trip began with an amusing photograph of a sub-compact car with its roof loaded with everything needed for a camping trip. The items reached to the ceiling of a display room. That, he said, is the complete gear for a camping trip, but it is not practical, adding that “we need to concentrate on practicality.” That is a theme that appears throughout Trip’s talk. The first activity was having his listeners touch their right hands to their left knees and then their left hands to their right knees, all in quick succession. This simple exercise was to show that we need to connect both sides of our brain: the right side (the creative and emotional side) and the left side (the systematic side).

Trip explained that the “most difficult problems require the most creative solutions.” He turned to a quotation from ‘Abdu’l-Bahá (Some Answered Questions 210), in which He talks about man’s spiritual powers: imagination, thought, and comprehension and “memory, which retains whatever man imagines, thinks and comprehends.” ‘Abdu’l-Bahá goes on to say that the intermediary between outward and inward powers in human beings is “the common faculty [or sympathetic nerve].”

Two Forms of Creativity. Trip then discussed two forms of creativity: (1) the individual activity: meditation for creation (for example, Einstein discovered relativity in isolation, and Newton (with a friend) invented calculus and discovered the law of motion and gravitation when he retreated from Cambridge to the county to escape the Great Plague. In the Bahá’í writings prayer is linked with meditation, something one does alone) and (2) a group activity: the clash of differing opinions for refining ideas. Trip quoted Henri Poincare, who said “It is through science that we prove but through intuition that we discover.” Then came a second audience-participation exercise in which Trip asked those listening to type in on a box on their computer screens when they felt more creative. Answers included early morning, in the shower, in the middle of the night, in nature, in dreams, soon after waking up. The audience responses aligned with studies asking the same question, where in isolation, between sleeping and waking, and in nature rank very high. “Isolation,” Trip said, “is the key to creativity.”

Trip then went on to say that since the 1950s, psychologists have known that group brainstorming does not work. Working as a group, people “come up with fewer and less original ideas than people working independently. Individual isolated reflection is 40 percent more effective”—in quantity and in creativeness. “Group work is best done once ideas have been generated. Then a vigorous debate leads to 25 to 40 percent more ideas and more original ideas.”

Creativity Part 1—The Science of Creativity. In Creativity Part 1, Trip turned to the science of creativity, devoting his next eleven slides to the topic. He juxtaposed eleven quotations mostly from ‘Abdu’l-Bahá’s talk in London on Sunday, January 12, 1913 (see Paris Talks 54.8–10, 12–13, 15, 17–18 and 35.3: 110) with quotations from Jason Lehrer’s book Imagine. It is impossible to quote all of the spiritual and scientific passages, but the scientific studies confirm what ‘Abdu’l-Bahá says. For example, ‘Abdu’l-Bahá says that “the sign of the intellect is contemplation and the sign of contemplation is silence, because it is impossible for a man to do two things at one time—he cannot both speak and meditate.” Lehrer says that “Divergent thinking is generally associated with an inward focus and an inward focus is necessary for creative solutions.” ‘Abdu’l-Bahá says that “while you meditate you are speaking with your own spirit”; Lehrer says that “Dreams enable our creativity” and “Divergent thinking trusts spontaneous epiphanies.”

Readers will want to listen to all of ‘Abdu’l-Bahá’s quotations that Trip pairs with scientific findings. The section ends with ‘Abdu’l-Bahá’s assertion that the “spiritual world bestows only the joy!” (Paris Talks 35.3: 110), while science says, “Laughter happens when two formerly disconnected ideas come together.”

Creativity Part 2—The Clash of Differing Opinions. Most of us know ‘Abdu’l-Bahá’s statement that “The shining spark of truth cometh forth only after the clash of differing opinions” (Selections from the Writings of ‘Abdu’l-Bahá 44.1: 93). Less frequently quoted is another assertion: “the light of reality becomes apparent when two opinions coincide” (The Promulgation of Universal Peace 5.2: 72. As a third audience-participation exercise, Trip asked, “When are you most creative in a group?” Audience answers included when there is joy, when there is no agenda, when in a small group, when all are allowed to speak, when there is a problem to solve, when relaxed. Trip said that he has found that “Most people say they are most creative in a group when there is laughter, vigorous debate, focused energy, full engagement.”

Trip talked about the importance of framing issues to be solved at a higher level. As an example, he discussed the scene in the movie Apollo 13 when it becomes clear that the astronauts are in very big trouble after a liquid oxygen tank exploded. The issue was not who is to blame or how can we make the next mission safer. The issue was “How do we save our friends and fellow astronauts?” For consulting groups, the issue must be “How do we create a better future?”

The fourth and final exercise was not one easily done in a Web Talk (Web Shop), but it is one that any committee or Spiritual Assembly could do. Trip asked everyone

This process, Trip said, is brainwriting. It allows everyone to participate equally, and it prevents anyone’s attempting to dominate. It can be done in silence in five or six minutes (rather than an hour or two for hearing each person’s ideas). Everyone’s original idea is changed as all participate.

According to Leigh Thompson, J. Jay Gerber Professor of Dispute Resolution & Organizations in the Kellogg School of Management at Northwestern University, Trip said, brainwriting has been shown to generate “20% more ideas and 42% more original ideas as compared to traditional brainstorming” and also “more diverse and candid ideas.” In fact, Thompson says she “‘was shocked to find there’s not a single published study in which a face-to-face brainstorming group out performs a brainwriting group.’” As for the clash of differing opinions, Loran Nordgren, an associate professor of Management and Organizations in the Kellogg School of Management at Northwestern University, has written that “Discussion . . . should only take place after the group has generated a variety of distinct ideas with which to work. Raw ideas rarely work. It’s the permutation and combination of the outlandish and banal that lead to the best proposals.” “Usually,’” Nordgren says, “‘the best idea that is selected at the end isn’t exactly what anyone came up with at the beginning; the idea has been edited.’”

One of Trip’s final take-aways was a formula for creativity:

Another suggestion for learning more about creativity was listening to Sir Ken Robinson’s Ted Talk “Do Schools Kill Creativity,” the most frequently listened-to Ted Talk to date. Robinson says that “imagination is random thoughts” and that “innovation is imagination with a purpose.” Trip also recommended his Webinar “Asking Better Questions” on the Association for Bahá’í Studies website and his YouTube video called “Dynamic Consultation 5: Expand.”

Trip ended his talk by quoting from Jason Lehrer’s book Imagine again, which says that “More interactions leads to more creativity” and “People are less likely to explore on their own when they are given explicit instructions.”

In the question-and-answer session that followed the talk, Trip answered a number of questions, including

As always, it is very had to capture all the nuances of a Web Talk. Hence we recommend that you listen to the Web Talk itself.