Todd Lawson Web Talk Series on the Báb, His Artistry, His Audience, and His Commentary on the Súrih of Joseph 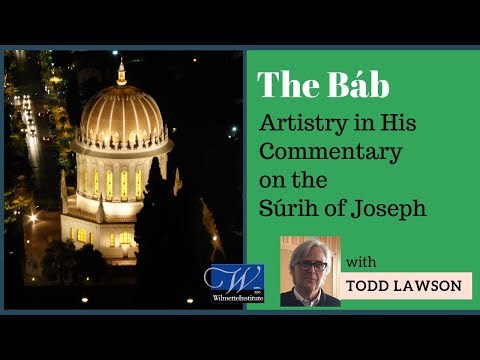 #1. “The Báb’s Artistry in His Commentary on the Súrih of Joseph”

Watch and Listen using YouTube & SoundCloud players at top of page. The new dispensation announced by the Báb challenged existing notions of religion and revelation. The Báb’s commentary on the Súrih of Joseph is a highly intricate and complex composition which betrays the authorial presence of the young messiah at every word. Yet, almost every word is Qur’anic, however rearranged and ordered to conform to the new message. Thus revelation is seen in a different light. While it is certainly divine in origin, the creativity and the boldness it represents should be seen as coming directly from the Báb Himself. Thus revelation emerges as a cooperative activity, one shared by God and the manifestation. Details and examples of such artistry and creativity will be illustrated through provisional translation.

Watch on YouTube: Web Talk or, Listen on SoundCloud The Islamic philosophic or mystical tradition, frequently indistinguishable from the Islamic tradition in general, has long been distinguished by the intensity with which it venerates and celebrates certain specific divine teachings from the Qur’án or the Hadith on the spiritual value of beauty. “God is beautiful and loves beauty” is just one such teaching. There are countless others. The purpose of this web talk is to link the Islamic veneration of beauty with the coming of the new revelation of the Báb and, later, Bahá’u’lláh, who is widely known and referred to by Bahá’ís as the Blessed Beauty. The study of “beauty” as such is, of course, impossibly broad. In the course of the web talk we will focus on two aspects, revelation and manifestation as “messengers” of divine beauty. First, there will be a summary and elucidation of the aesthetic dimension of the Qur’anic revelation. Secondly, we will present the Islamic belief that Joseph, the subject of the Báb’s proclamatory Commentary introduced in web talk #1, was a unique embodiment of both spiritual and physical divine or blessed beauty. Muhammad, prophet and divine manifestation (and founder of Islam) is seen by the Islamic tradition as a reappearance of such spiritual and moral beauty. As we know, the Bahá’í Faith emphasizes the quality of beauty as elements of both the revelation and person of the divine manifestations, the Báb and Bahá’u’lláh. The role of beauty as religious or spiritual value, then, may be seen to be inherited, enriched and universalized by the Bahá’í revelation.

#3. “The Báb’s Great Announcement to Mulla Husayn: Chapter One of the Qayyúmu’l-Asmá’, The Súrih of Dominion (Mulk)”

Watch on YouTube: Web Talk or, Listen on SoundCloud

In the Kitáb-i-Íqán Mulla Husayn is referred to by Bahá’u’lláh thus: But for him, God would not have been established upon the seat of His mercy, nor ascended the throne of eternal glory. This suggests, among other things, that had Mulla Husayn not recognized the Báb’s station and accepted His claims the new era would not have begun. We know from Bahá’í history that what enabled Mulla Husayn to acknowledge the truth of the Báb’s claims was in fact the first chapter of the Qayyúmu’l-Asmá’, also known as the Commentary on the Súrih of Joseph. In this web-talk we will enumerate in detail the various features of this brief composition, features that we may assume were of such striking originality and obvious divine authority (another way to translate the Arabic word mulk) that Mulla Husayn had no choice but to become the Báb’s first follower or, as he is sometimes referred to, the gate of the Gate.

Additional Resources from the Presenter

Todd Lawson is Professor Emeritus of Islamic Thought, University of Toronto. He has been a Bahá’í since 1968 and has been a member, since 1975, of the Association for Bahá’í Studies who awarded him the distinguished book award for his study of the Qayyúmu’l-Asmá’, Gnostic apocalypse and Islam (Routledge 2012) Todd has published numerous articles and books on the relationship between the Bahá’í Faith and Islam, Qur’an Commentary, Sufism and Shi’ism. His most recent book is, Intimacy and ecstasy in Qur’án Commentary which is a study of the Báb’s earliest major work. More information on this may be found here: https://brill.com/view/title/39020. Todd lives in Montreal with his wife Barbara.

See All Articles
Home Articles & Videos Todd Lawson Web Talk Series on the Báb, His Artistry, His Audience, and His Commentary on the Súrih of Joseph