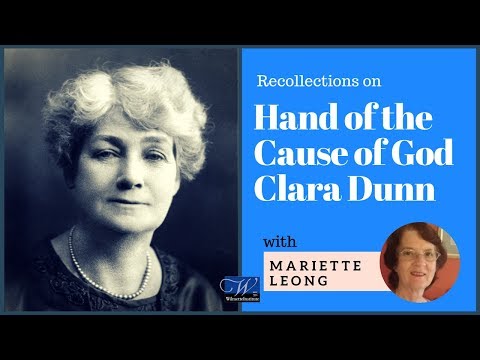 In this presentation Mariette traces the early life of Clara Dunn, how she met Henry Hyde Dunn and learned of the Bahá’í Faith from him. When the Tablets of the Divine Plan were presented in New York in 1919 they decided to arise as pioneers to Australia with the blessing of the Beloved Master. They arrived in Sydney Australia on 10 April 1920 with hardly a penny to their name, persevered in their determined efforts to share the Bahá’í teachings with the people of the country and succeeded in its establishment in the early years. They are today affectionately remembered as Father and Mother Dunn, the spiritual conquerors of a continent, and they are the only Hands of the Cause of God, husband and wife, buried side by side. The 100th year anniversary of their arrival in Australia is coming up in year 2020, a time of celebration and loving remembrance of two wonderful souls who sacrificed their lives in the promotion of the Faith of Bahá’u’lláh in a distant land, and the rich legacy they left behind!

Mariette will recount the lives of Father and Mother Dunn and share stories of Mother Dunn when she was growing up in Adelaide, South Australia and the lasting impressions Mother has made on her life to this day.

Mariette Leong grew up in a family of four girls and a boy in Adelaide, South Australia. Her parents were Madge and Collis Featherstone who heard of the Bahá’í Faith in 1944 and became actively involved with the growth and development of the community right from the time of their declaration. Together with her older sister Joan, Mariette travelled to Malaysia to attend the first South East Asian Regional Youth Conference in December 1968, with the encouragement of their father. This was intended to be a stopover before proceeding to India which was their originally intended destination. Fate intervened, however, and the sisters ended up marrying their respective husbands In Kuala Lumpur. Mariette returned to Australia at the end of 1971 with husband Ho-San Leong. In 1974 she pioneered with her husband to Papua New Guinea and lived there over a period of 26 years, serving the Bahá’í community in various capacities, and was on the National Spiritual Assembly at one stage as its Secretary. Mariette worked part-time in different jobs from developing a secretarial course and presenting it at a business training institute to teaching piano professionally. She is now teaching piano to four of her grandchildren. Mariette and her husband have retired to live in the coastal city of Wollongong about two hours south of Sydney, Australia. They have four children and also an adopted Papua New Guinean daughter, all married, and nine grandchildren.

Most of us have grown up in a society steeped in materialism and consumerism. How can we avoid letting them contaminate the lofty Days of Há?

...the NCCU Theater department ... in collaboration with the Wilmette Institute, hosted a powerful play, The Bus Stop, to create a springboard for dialogical education about the pressing social issue of the mass incarceration of people of color.