The Badí‘ Calendar in a Stained-Glass Skylight

Frances Pollitt, a Bahá’í from Fryeburg, Maine, USA, enrolled in the Wilmette Institute’s Badí‘ (Bahá’í) Calendar: Reshaping Our Material, Society and Spiritual Reality course after reading recent guidance from the Universal House of Justice on understanding certain elements of the calendar. She discovered that there was much more to the Badí‘ calendar than met the eye and was strangely moved by what she learned. About the same time Frances also attended a Book 9 tutor training where emphasis was placed on allowing the arts to inform learning. As chance would have it, she and her husband were building a home in Wayland, Massachusetts, where the house designers asked them to explore a stained-glass window design to adorn a skylight. The designers themselves even began looking for Bahá’í-inspired themes.

Though Frances is no artist, she knew some in Brownfield, Maine, a nearby community. Heather MacLeod, with the support of her Bahá’í husband, Joe Keller, agreed to take on the commission of the artwork. With many consultations on symbolism and careful reference to Nader Saiedi’s Gate of the Heart: Understanding the Writings of the Báb (Canada: Wilfrid Laurier UP, 2008) and the assistance of Bahá’ís in putting together calendars for reference, a stunning stained-glass art installation was completed one year, to the day, after it was commissioned. Frances describes the project this way: 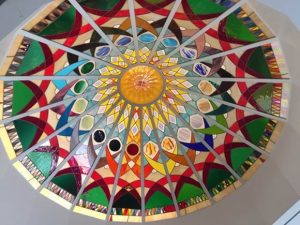 “The elements of the stained-glass skylight include 19 panels with 19 days marked in each panel. The year 173 B.E. (2016–17) was chosen to mark the solstices, equinoxes, and Holy Days. A hand-blown glass disk etched with the Bahá’í ringstone symbol crowns the apex of the 19 panels, which lie at a 45 degree angle. We tried to include as much symbolism as we could think of; for example, we chose a 45 degree angle for the panels: 4 + 5 = 9.

“The following quotations from the Persian Bayan and the Universal House of Justice were inspirational:

The first three months are the fire of God, the next four months, the air of eternity, and the subsequent six months are the water of divine unity which streameth forth upon all souls, descending from the atmosphere of eternity, which in turn is derived from the fire of God. The last six months pertain to earthly existence, whereby all that hath appeared from these three elements may be established within the element of dust, through which the fruit will be harvested.—Persian Bayan 5:3 in Nader Saiedi, Gate of the Heart: Understanding the Writings of the Báb 75

The adoption of a new calendar in each dispensation is a symbol of the power of Divine Revelation to reshape human perception of material, social, and spiritual reality. Through it, sacred moments are distinguished, humanity’s place in time and space reimagined, and the rhythm of life recast.—The Universal House of Justice, letter to the Bahá’ís of the World, July 10, 2014, par. 8)

“The four elements of Fire, Air, Water, and Earth were included in the design based on the Báb’s description. The Holy Days were marked with five-pointed stars, inspired by the words of the Universal House of Justice: “sacred moments are distinguished.” One of our greatest challenges in the design process was reshaping our understanding of time and space.

“Carpenters, painters and designers on the house-building site lent their hands to the project, and I printed the words of the Universal House of Justice (quoted above) on a chart for all to read. As each panel was completed, it was installed for the benefit of the laborers on site—they all understood the elements of the Badí‘ calendar, not to mention the direction towards Bahji.

“With the greatest joy and delight in the process of building this stained-glass skylight, and giving thanks to Bahá’u’lláh, we share our learnings of the Badí‘ calendar.”

Click here for a three-minute slide show of how the stained-glass skylight was made. The chant is from the Persian Bayan. The hum in the background of the chant is created by a Shruti Box, an instrument that traditionally works on a system of bellows, creating a sound similar to the drone of a harmonium or bagpipes. A website about the skylight is available here.