Roya Akhavan: Peace for Our Planet: A New Approach 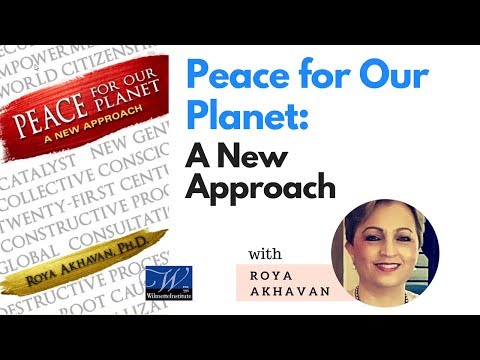 Peace for Our Planet tells the story of a new historical dialectic in the world between two parallel processes: one of construction and the other of destruction. It traces the growth in the constructive global consciousness that began in the nineteenth century and the progress humanity has since made toward the achievement of a more just and peaceful world. Under the spotlight of this constructive collective consciousness, the outworn and destructive mindsets that have constituted the root causes of war for millennia, including racism, nationalism, religious strife, gender inequality and extremes of wealth and poverty, have now been exposed and delegitimized. Those who have benefited from these divisive attitudes are currently taking a last stand. Yet, they are fighting a losing battle. Amidst the blinding haze generated by the accelerated collapse of outworn mindsets and institutions, Peace for Our Planet seeks to bring into focus the forward march of the constructive process toward peace, and the powerful role each of us can play in its realization.

Dr. Roya Akhavan currently serves as Professor and Director of Graduate Studies at the Department of Mass Communications, St. Cloud State University. Her research in the field of mass communication extends into a range of related areas, including international affairs and peace studies. She has held leadership positions as V.P. for International Marketing at CVSC in China, and as Chair of her academic department in Minnesota. Dr. Akhavan is a frequent speaker on global issues at national and international forums and radio and television programs. Her most recent work is a book entitled "Peace for Our Planet: A New Approach."