Parallels in the Lives and Ministries of Tahirih and Paul 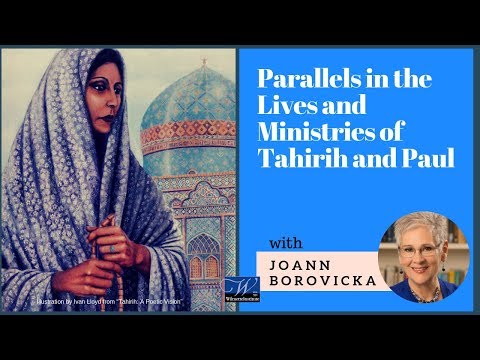 Táhirih, a woman born into the Islamic religion in the nineteenth-century Persian Empire, is the most renowned heroine of the earliest days of the Bahá’í Faith. Paul, a man born into the Jewish religion in the first century Roman Empire, is often referred to as the most prominent apostle in the early history of Christianity. Táhirih and Paul are separated by gender, religion, nationality, culture, and eighteen hundred years. And yet, when stories of their lives and apostolic ministries are compared, parallels arise. This talk will point out nine parallels in the ministries of Táhirih and Paul and reflect on the value of this knowledge in interfaith dialogue.

JoAnn Borovicka recently retired from a career in the Arts and Education where she worked primarily in the South Carolina Coastal Region with some activity overseas. Her work was rich and varied and included curriculum design, professional storytelling, creative writing, dance performance and instruction, costume design, art instruction, studio art, and work in object conservation. Post-retirement she has maintained her studio art activities and also turned her energies to research and writing. She is the author of Light of the Kingdom—Biblical Topics in the Baha’i Writings (2016) and other works (see bahai-library.com) and co-author of Crossing the Line—A Memoir of Race, Religion, and Change (2019). She and her husband, Mike, live in Greenville, South Carolina.

The Problem with Short-Termism

Is there an alternative method to solve global challenges that is more effective than short-termism? Yes; we can opt for a principled approach.