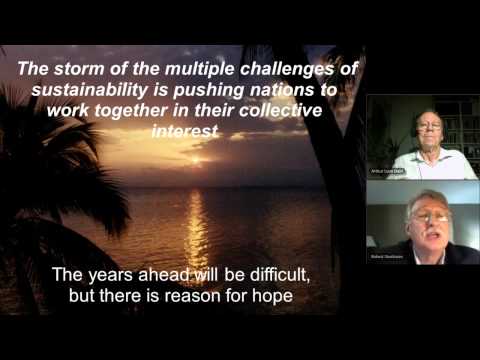 the pathway to sustainability will be one of empowerment, collaboration and continual processes of questioning, learning and action in all regions of the world. . . . As the sweeping tides of consumerism, unfettered consumption, extreme poverty and marginalization recede, they will reveal the human capacities for justice, reciprocity and happiness.

Dr. Dahl’s final assessment was that “The storm of the multiple challenges of sustainability is pushing nations to work together in their collective interest. The years ahead will be difficult, but there is reason for hope.” The question-and-answer session following Dr. Dahl’s talk started a bit slowly but picked up momentum. At the end of the 45 minute Q/A session, there were at least thirty questions waiting for answers.

I have always been a Bahá’í, loved nature since I was taught about it in children’s classes, and set my goal to become a Bahá’í pioneer at the conference launching the Ten-year Crusade in 1953. I was finishing my Ph.D. in marine biology in 1969 when the Santa Barbara oil spill covered my research material and I was doing pollution studies by default. While doing coral reef research at the Smithsonian Institution, I lectured at the first Earth Day in Washington, DC in 1970, and represented the Bahá’í International Community at the United Nations Conference on the Human Environment in Stockholm in 1972. I was finally able to pioneer to New Caledonia in 1974, becoming the Regional Ecological Adviser to all the Pacific Island Countries at the Pacific Community, where I organized the Pacific Regional Environment Programme. I then joined the UN Environment Programme in Nairobi, Kenya, as Deputy Director of the Oceans and Coastal Areas Programme, before serving in the Secretariat of the 1992 Rio Earth Summit to prepare Agenda 21, the global action plan for sustainable development, and then coordinating the UN System-Wide Earthwatch from Geneva, Switzerland, where I am still based. I have been President of the International Environment Forum, a Bahá’í-inspired organization for environment and sustainability, since 1997, and am also on the governing board of another Bahá’í-inspired organization, ebbf – Ethical Business Building the Future. I teach sustainability in several academic programmes, participate in international research projects on values-based indicators and education for sustainability, and have been Visiting Professor at the University of Brighton, UK, and the European Center for Peace and Development in Belgrade, Serbia. I have been a consultant to the World Bank, the World Economic Forum, and other international organizations. Among my many many scientific papers and books are: “Unless and Until: A Bahá’í Focus on the Environment”, “The Eco Principle: Ecology and Economics in Symbiosis,” “In Pursuit of Hope: A Guide for the Seeker” and (with two co-authors) “Global Governance and the Emergence of Global Institutions for the 21st Century,” based on proposals that won the New Shape Prize of the Global Challenges Foundation in 2018. My personal web site includes a complete CV and bibliography.See Faculty Bio