Learner Reflects Deeply on the Tablet of Ahmad

Writing About the Writings: The Art and Craft of the Personal Reflection Piece 2019
Faculty: Sandra Hutchison

Ruby Edgar’s second course with the Wilmette Institute was Writing about the Writings: The Art and Craft of the Personal Reflection Piece. Ruby chose to study Bahá’u’lláh’s Tablet of Ahmad, written during His exile in Edirne (Adrianople). The tablet was addressed to one of Bahá’u’lláh’s most ardent followers, who had suffered numerous acts of persecution for accepting the teachings of the Báb and Bahá’u’lláh.

We wish Ruby the best as she prepares to share what she has learned about the Tablet of Ahmad with her community. Here is what she  had to say about the course in her Learning Self-Assessment.

I accomplished most of my learning plan goals. The final presentation has not been done yet. I may do a presentation on the Tablet of Ahmad for my section of the community. We have neighborhood community Feasts.

I had never really looked at the Tablet of Ahmad before. I have read it many times but this course compelled me to search for more meaning and actually study it in a new way, such as experiencing new meanings of words and sinking into the language and rhetoric. I also have a deeper understanding of the one to whom the Tablet was sent and why it was sent. I would like to read and write about the Writings more, or at least write more about the Tablet of Ahmad and study more resources about it. 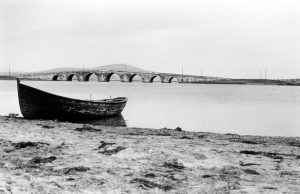 The bridge in Turkey which Bahá’u’lláh and His companions crossed on their way from Istanbul (Constantinople) to Edirne in December 1863. Image souce: Bahá’í Media Bank

The only change in my beliefs is more confirmation about them and growing closer to the Teachings. I also loved my mentor Sandra Hutchison because she was an exemplar. I loved her composition “O Pen” and I plan to study it further, its meaning, its organization, its language. This work was an outstanding model of a personal reflection piece.

I can do more study on this Tablet, write more about it and share it whenever the opportunity presents itself. I hope that God will help me open that door since I feel so inadequate. I deeply appreciate this course and I love the Wilmette Institute.