Biotechnology, Benefits and Perils: The Need for Spiritual Perspective in Achieving Harmony of Science and Religion 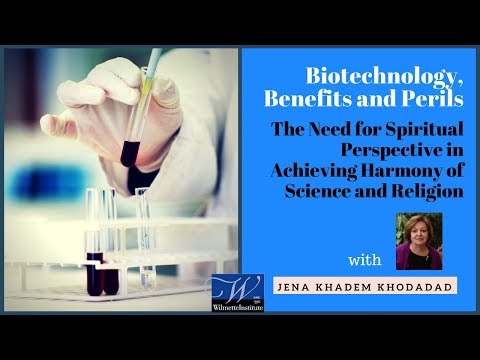 Momentous advancement in the past century and a half in molecular biology of the gene has spurred a scientific and medical revolution, accompanied at once with undreamt of possibilities as well as considerable moral and ethical implications. Such developments include: breakthrough in the structure of the DNA molecule, the carrier of the genetic information in all living things; the mapping and decoding of the entire human genome; and the technology for editing and modifying the gene. The rapidly advancing technology of gene editing, bearing the acronym CRISPER, is acquiring increasing refinements, enhanced possibilities and wider applications.

Other biotechnologies, such as recombinant DNA, gene cloning, and stem cell research, are among numerous other advances which hold prospects for the welfare of humankind, but can also portend harmful outcomes. Among the significant benefits are: identification of the genetic base of disease, eradication of deadly diseases, development of drugs and therapies, prolongation of human life and much more. Among the adverse implications are: eugenics, human cloning, generation of biohazards and their release into the environment.

Such technological advances bring to the forefront the benefits but also the perils of biotechnology, recalling the dystopian predictions in the “Brave New World” of Aldous Huxley.

Followers of traditional religions may adopt a stance against such technologies, which they believe tamper with the gene and trespass into the realm of God’s creation. The sacred writings of the Bahá’í Faith, however, inculcate the importance of scientific investigation and knowledge. Hence Bahá’í scientists will likely choose to promote progress in scientific learning toward “the extermination of disease, to the extension of scientific research, to the raising of the standard of physical health, to the sharpening and refinement of the human brain, … to the prolongation of human life, and to the furtherance of any other agency that can stimulate the intellectual, the moral, and spiritual life of the entire human race.” (Shoghi Effendi, The World Order of Baha’u’llah, p. 204) while at the same time remaining vigilant of their harmful implications.

Jena Khadem Khodadad, holds a Ph.D from Northwestern University in biological sciences (cell and molecular biology). Her academic career as professor on the medical and graduate college faculties has entailed teaching of cell and molecular biology and neuroscience and research on the molecular organization of biological membranes. The results of her work were presented before national and international scientific forums and published in scientific journals and books. Jena has served on institutions and agencies of the Bahá'í Faith. As an advocate of human rights, Jena has presented before human rights organizations including Amnesty International and the American Jewish Committee on the denial of higher education to Bahá'ís in Iran. As an active member of an interfaith organization, she is dedicated to interfaith understanding and dialogue. Jena is the daughter of Hand of the Cause of God, Zikrullah Khadem and Javidukht Khadem and was raised in a household infused with love and passion of the Bahá'í Faith. She has attained the presence of Shoghi Effendi and presented at numerous conferences, seminars and classes on “Shoghi Effendi, the Guardian of the Bahá'í Faith”-- a theme which is integral to the focus of this web talk.  Jena’s most recent writing, The Dynamics of Growth: Scientific Principles at Work in the Worldwide Advancement of the Bahá'í Faith, is published by George Ronald. This book applies insights from science to the question of growth of the Bahá'í Faith in particular and to growth of religions in general. Jena and her husband, Manuchehr, live in the United States in the Chicago area.

See All Articles
Home Articles & Videos Biotechnology, Benefits and Perils: The Need for Spiritual Perspective in Achieving Harmony of Science and Religion