Hooshmand Badee, "Is There a Economic System?" 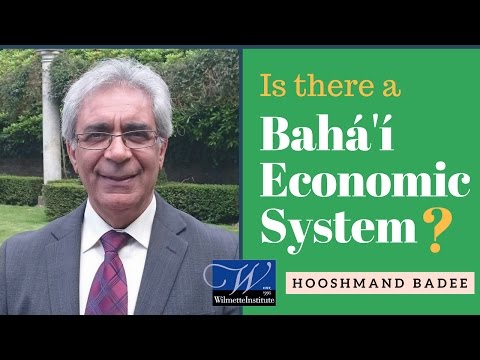 Living amongst both the poorest nations and the wealthiest nations of the world for more than four decades, I witnessed inequality in the standard of living and a widening gap between the rich and the poor. It was clear from my experiences and observations that such extremes and their effects on people’s lives are of great significance in understanding and redefining human well-being. It was this condition that fueled my passion for studying and researching the Bahá’í teachings on economics and exploring alternative solutions to tackle some of the challenging economic questions of our time. Hence, I did my doctoral research at the University of Leeds (the administrative part) in the UK in 2016. My doctoral research title is “The Bahá’í teachings on economics and their implications for the Bahá’í community and the wider society.” In 2018, a thesis to the book was completed. The new title is Economics and the Bahá’í Faith. In 1983, I was inspired by the message of the Universal House of Justice and got involved in Bahá’í social and economic development projects in Bangladesh as well as later on in Saint Vincent and the Grenadines in the West Indies with the aim of putting the grassroots population at the centre of activities.See Faculty Bio

See All Articles
Home Articles & Videos Hooshmand Badee, “Is There a Economic System?”