I was one of a number of young British Bahá’ís who were attracted to the scholarly study of the Faith by the pioneering work of Hasan Balyuzi. As a group we began a series of academically-oriented Bahá’í Studies seminars (which still continue) and a few of us also chose Bábí and Bahá’í topics for our doctoral research. My own PhD was later published by Cambridge University Press as ‘The Bábí and Bahá’í Religions: From Messianic Shi`ism to a World Religion’ (1987). I moved to Thailand in 1985 where I became involved in setting up what is now Mahidol University’s International College (MUIC). At MUIC, I established the Social Science Division (1998), which I chaired until my retirement in 2013. I also served as the equivalent of academic dean for several years.

I have published widely on Bábí-Bahá’í Studies (see my CV). For a short summary of my published books see: https://youtu.be/G0fm_ICy9j0 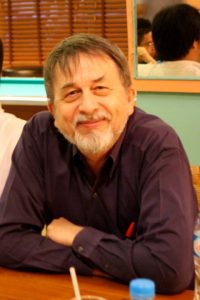