Department of Religion, Theology, and Philosophy

I have been researching and teaching the Bahá’í Faith for quarter of a century. I came to know about the Faith in the early 1990s when I arrived in the United States for my graduate studies in religion at Temple University in Philadelphia. After completing my doctoral program, I started teaching at the University of the Arts, also in Philadelphia, where I incorporated introductory lectures about Bahá’í history and teachings into various courses in religion, including World religions; Religion, art, and the apocalypse; Afterlife; and Holy war.

Between 1994 and 2015 I delivered eleven scholarly presentations on various Bahá’í philosophical and religious topics at the regional and national American Academy of Religion conferences as well as the meetings of the Association of Bahá’í Studies (North America). In those years I have also published several articles and YouTube video lectures on various aspects of Bahá’í religion and philosophy in Russian and English languages as well as two books, including a monograph Theory of Religious Cycles: Tradition, Modernity and the Bahá’í Faith (Brill, 2015).

I am the founding editor of Studies in Bahá’í Philosophy (2012 – 2015), the first scholarly journal in this field of study. I am also the founder and moderator of the Facebook group under the same title, which now has 596 members. Since 2016 I have taught courses on Bahá’í philosophy and theology for the Wilmette Institute. In 2017 I was appointed Chair of its department of religion, philosophy, and theology (co-chair since 2019). 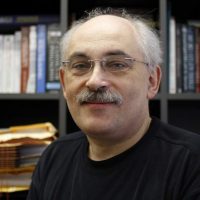 An Overview of Baha’i Philosophical Teachings
The Journey of the Soul: Baha’i Teachings About Life After Death
Apocalypse in Modern Religions: 7-Day Adventism, Jehovah’s Witnesses, and the Baha’i Faith