A Divine Overture to an Imperious Monarch: A Closer Look at Bahá’u’lláh’s Letter to the Iranian King Násiri’d-Dín Sháh 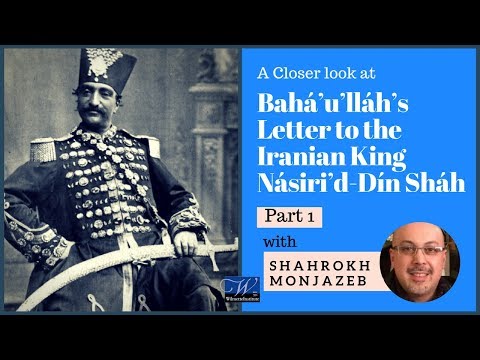 Part 1: General Introduction & the Study of Paragraphs 1 to 30

This Web Talk, the first of three Webinars for the Wilmette Institute Course “A Weighty but Gracious Summons to a Despotic Ruler: A Study of the Lawh-i-Sultán (Tablet to the King)”, will provide a general introduction and analysis of the major themes of this lengthy and very important proclamatory Work of Bahá’u’lláh.

In this momentous Tablet, in addition to proclaiming His Divine Mission to the monarch of His native land, Bahá’u’lláh attempts to set the record straight by refuting many widespread allegations and falsehoods against Him and His followers, which had been for years fabricated and disseminated within Iran and abroad by the Iranian government and its partner institution, the Shí‘a clergy.

See All Articles
Home Articles & Videos A Divine Overture to an Imperious Monarch: A Closer Look at Bahá’u’lláh’s Letter to the Iranian King Násiri’d-Dín Sháh