Using the Kitáb-i-Iqán to Teach Evangelical Christians in Nigeria 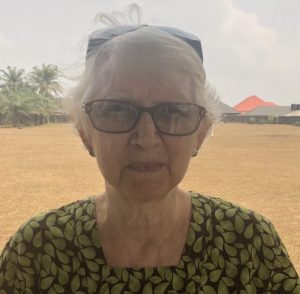 Martha Garman, a pioneer to Africa with her husband for forty-five years, was in Upstate New York in the late summer of 2017 for “medical repairs” (in her case cataract surgery on both eyes) so that they could return to their post in Nigeria, where they operate the Mona School on Bahá’í principles. While in New York, they both took the Wilmette course The Kitáb-i-Iqán: An Introduction 2017.

Martha’s goals were standard: read, watch, and post about the assignments; discuss the information with her husband on a daily basis; and learn about the “magic of computers” (she didn’t totally master the computer, but at the age of seventy-seven she listened to her first audio book on the computer and her first Web Talk and also learned to use YouTube). But her most important goal was sharing what she learned and incorporating “all my new understandings in personal conversations with my Christian friends.” That would take time.

Before she and her husband left New York, Martha selected passages from the Kitáb-i-Iqán for their last Feast in the United States and explained a few things about the importance of the book.

When Martha and her husband returned to Sapele, Nigeria, they participated in activities for the Twin Birthdays in October 2017 (more than one thousand people attended celebrations in five locations in Sapele).

On December 25 and 26, Martha planned a community study of what she had learned in the course on the Iqán. Twenty-six attended, with thirteen adults (a mix of women and men), six youth (six girls and one boy), and seven children. The youth participated in the discussions along with the adults.

Martha explained that the Universal House of Justice had selected Sapele, Nigeria, as a “special initiative community” and had sent three international pioneers from English-speaking Cameroon. The pioneers were key participants in the community deepening, as they were well-versed in the book. Topics included in the discussion were:

One participant said that “the group discussion brought out far more than his individual reading.” The two-day meeting ended on a happy note. The older boys “love art work,” and they and others colored the eighteen pages of a “Blessed is the spot” wall frieze. Many held one page of the frieze during a closing prayer.

Now Martha feels ready for conversations with her evangelical friends.