The authors of two recent books acknowledge the help and encouragement they received in the Wilmette Institute’s course Writing Biographies and Histories: Recording Stories of People and Places first offered in 2015. Janet Fleming Rose’s A Seed in Your Heart: The Life of Louise Mathew Gregory was published in 2018 by George Ronald. Don Brown’s SOLE DESIRE SERVE CAUSE: An Odyssey of Bahá’í Service: Knights of Bahá’u’lláh Gale and Jameson Bond was published by George Ronald a year earlier, in 2017. Both books are available from the U.S. Bahá’í Distribution Service.

A Seed in Your Heart. Janet Fleming Rose’s biography of Louise Mathew Gregory (1866–1956), A Seed in Your Heart, tells the story of an Englishwoman who is best known for her marriage to the African American Bahá’í Louis Gregory, whom Shoghi Effendi posthumously named a Hand of the Cause of God. But Louise—who, as a new Bahá’í, traveled to Egypt to meet ‘Abdu’l-Bahá, heard Him talk in Paris and London, and then traveled with Him to the United States—had many accomplishments of her own. She was awarded a university teaching certificate, unusual for a Victorian woman, and pioneered in Luxembourg, Hungary, and the Balkans, including lengthy stays in Bulgaria and Yugoslavia.

When Janet took the Wilmette Institute course Writing Biographies and Histories, she shared a long-term goal: “to research and write a full biography of Louise Mathew Gregory.” She said that she had already researched some of Louise’s early life and asked for “advice on continuing this research and transforming it into a biography.” She also explained that she had “been privileged to have access to the original letters of Shoghi Effendi to the British Bahá’í community” and that reading these has “inspired” her to “find out more about some of the early Bahá’ís of the United Kingdom.” In 2015 a friend told Janet about the Wilmette Institute’s new online course on writing biographies and histories. She found the course and her mentor Adam Thorne “inspirational.”

The 264-page biography contains a preface, acknowledgments, a prologue, a bibliography, notes and references, and an index. It also includes many photographs, a map of Louise Gregory’s European travels, and an appendix outlining when she was in the United States and when she left on her many European trips and where she went. The title of the book is taken from something ‘Abdu’l-Bahá said to Louise:

SOLE DESIRE SERVE CAUSE. Don Brown’s SOLE DESIRE SERVE CAUSE: An Odyssey of Bahá’í Service—Knights of Bahá’u’lláh Gale and Jameson Bond is the memoirs of Gale (1919–2009) and Jameson (1917–2007) Bond over their six decades of service to the Faith. Don finished the book in 2017, “thanks in large part to my participation in a . . . Wilmette Institute course Writing Biographies and Histories and particularly the advice and guidance I received from my mentor Robert Stockman.” Knight of Bahá’u’lláh is the title Shoghi Effendi gave to any Bahá’í who opened a virgin territory to the Bahá’í Faith in response to the goals of his Ten Year World Crusade, 1953–63.

The Bonds became Knights of Bahá’u’lláh when they pioneered to the Canadian District of Franklin above the Arctic Circle. The first half of the book is written in their voices up to the end of the Ten Year Crusade, as it is based on interviews with Gale and materials written by Jamie. Both Gale and Jamie passed away before the book was half written; hence the remainder of the book is based on research in thirty-one boxes of their files, as well as on communications with Bahá’í institutions, Bahá’í friends, and their children, Susan and David. 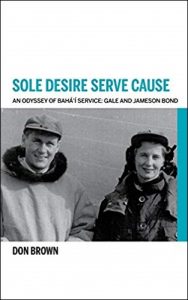 SOLE DESIRE SERVE CAUSE is a rather hefty volume, running as it does to 436 pages. It contains an informative author’s preface that explains how the Bonds’ memoirs were assembled, an introduction by the Bonds themselves, and a trove of photographs. The books’ appendix contains biographical information and records of Bahá’í service for both Jameson and Gale—information requested by the Universal House of Justice from all Knights of Bahá’u’lláh—followed by notes and references. The title of the book comes from a cable Gale and Jameson sent to Shoghi Effendi, the Guardian of the Bahá’í Faith, on August 16, 1955, seeking guidance on employment options in the Arctic and expressing the central purpose of their lives. “SOLE DESIRE SERVE CAUSE” encapsulates their live of service to the Faith of Bahá’u’lláh.

Writing Biographies and Histories Course. When the Wilmette Institute began offering Writing Biographies and Histories in 2015, it hoped that the course would inspire Bahá’ís “to write the history of their local community, compose a memoir about their own lives, or produce a biography of someone else.” The first half of the course covers the how-tos of writing biographies and histories: selecting a topic and audience, the philosophy and ethics of such accounts, oral histories, research, organizing notes, and outlining the topic. During the second half of the course, participants pursue a research and writing project, advised by a faculty mentor.

To date, the course is credited with helping to bring many short historical and biographical pieces to fruition and at least the two books discussed above to publication—the one on Louise Mathew Gregory and the memoirs of Gale and Jameson Bond.

If you are interested in taking the course, you are in luck. Writing Biographies and Histories: Recording Stories of People and Places will be offered later this year from November 12 through December 30, 2019.

As far as A Seed in Your Heart and Sole Desire Serve Cause are concerned: Reading the accounts about and by these intrepid lovers of Baha’u’lláh may help you rekindle and/or increase your determination to give your all to helping win the goals of the Universal House of Justice’s Five Year Plan, a continuation of ‘Abdu’l-Bahá’s Tablets of the Divine Plan and Shoghi Effendi’s several plans, including the Ten Year World Crusade that took the Bonds to the Artic in obedience to Shoghi Effendi.