Dr. Moojan Momen, "The Re‑Creation and Utilization of a Community’s Memories: Shoghi Effendi and Baha’i History" 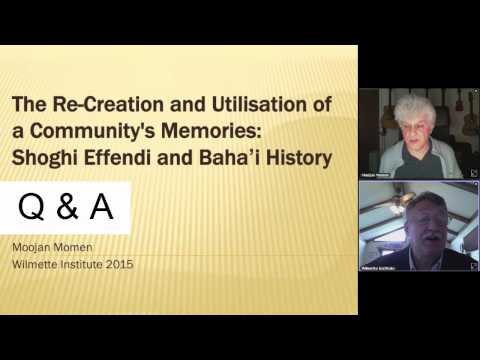 Dr. Moojan Momen was born in Iran, but was raised and educated in England, attending the University of Cambridge. He has a special interest in the study of Shi`i Islam and the Bahá’í Faith, both from the viewpoint of their history and their doctrines. In recent years, his interests have extended to the study of the phenomenon of religion. His principal publications in these fields include: Introduction to Shi`i Islam (New Haven: Yale University Press, 1985); The Phenomenon of Religion (Oxford: OneWorld, 1999, republished as Understanding Religion, 2008); and The Baha’i Communities of Iran (1851-1921); Vol. 1: The North of Iran (Oxford: George Ronald, 2015). He has contributed articles to encyclopaedias such as Encyclopedia Iranica and Encyclopedia of the Modern Islamic World as well as papers to academic journals such as International Journal of Middle East Studies, Past and Present, Religion, Iran, and Iranian Studies. He is a Fellow of the Royal Asiatic Society.See Faculty Bio