Arlette George, a home-front pioneer and an isolated believer in the West Highland cluster in Scotland in the U.K., loves walking, music, health-food cooking, and writing. The course on The New Five Year Plan (2016–21): Completing the First Century of the Formative Age (Faculty, Niki Daniels, Farzin Aghdasi, Mat Cotton, Sherna Deamer, Joan Lincoln) is her third Wilmette Institute course. Her learnings and actions in the course were numerous: saying a prayer revealed to the Bahá’ís of the United States and Canada at least twice a week; using a new song Have Mercy (which draws inspiration from the same prayer) by Bonnie Lisbeth to help her meditate on the prayer; fostering more understanding among family members; dedicating herself to moving her cluster to the first milestone; using internet social spaces to spread the Faith to remote areas; traveling to remote communities to serve the Bahá’ís and the local population; arising to meet the Herculean tasks ahead; reading the guidance from the Universal House of Justice daily; and being happy under all circumstances. Perhaps the most unusual thing Arlette has done in response to the course on the Five Year Plan is to create some doodles that emerged as she was meditating on a paragraph in the December 29, 2015, letter from the Universal House of Justice to the Conference of the Continental Boards of Counselors about the new Five Year Plan. Let Arlette tell the story herself. 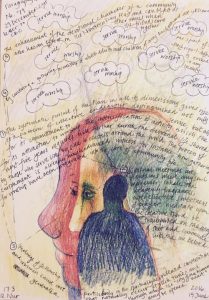 “I used Derwent Inktense drawing pencils. I started off with a doodle. I was preparing to visit the isolated believers in Tobermory, Mull, and Oban [in Scotland] and wanted to explore more one aspect/paragraph (49) of the December 29, 2015, letter from the Universal House of Justice about the Five Year Plan that I could share with them:

The systematic pursuit of the Plan in all its dimensions gives rise to a pattern of collective endeavor distinguished not only for its commitment to service, but also for its attraction to worship. The intensification of activity which the next five years requires will further enrich the devotional life shared by those who serve side by side in clusters around the world. This process of enrichment is already much advanced: witness, for instance, how gatherings for worship have been integrated into the core of community life. Devotional meetings are occasions where any soul may enter, inhale the heavenly fragrances, experience the sweetness of prayer, meditate on the Creative Word, be transported on the wings of the spirit, and commune with the one Beloved. 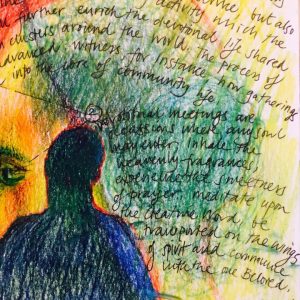 “I read these lines about five times and then without too much thought continued doodling until the image emerged. Then I realized I had been meditating on the words of that paragraph, so I copied them in (though they are hard to read) to help me remember and even begin to memorize the first five sentences of the paragraph. The image reminds me of what can emerge as a strongly focused sense of purpose that arises in serving together, cultivated by the devotional attitude of prayer: worship and service go together in this spiritual enterprise. Further, I could also see again how this spirit becomes a magnet to the stranger.”