The Báb’s Tablet about the Special Prophethood of Muhammad 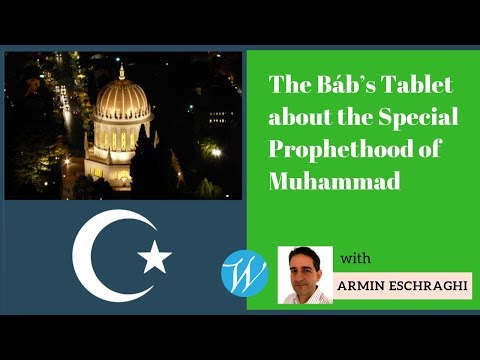 The Báb, during the first years of His ministry, wrote numerous treatises in response to queries about Qur’anic verses and Hadith (purported sayings of Muhammad and the Imáms) and about theological themes. While in Isfahan, he was asked by the Governor of that city to address the issue of Muhammad’s specific prophetic mission. He was also asked about proofs to be adduced for the truth of Muhammad’s Prophethood. The Bab revealed a treatise of roughly 40 pages in response. The genre of “Proofs of Prophethood” is well-known in Islamic literature. Yet, the Báb adopts a rather unusual approach. His explications do not seem to contain proofs in a more narrow sense of the word. The Báb does not specifically and primarily address the historic person of the founder of Islam. Rather, He appears to meditate on the spiritual nature of the Manifestations of God in general and on the process of revelation. We will try to give a short introduction to the history and background of the Báb’s “Treatise on Specific Prophethood”, and then investigate whether this text, like all early Writings of the Báb, might also be read, on a second layer, as a promotion of the Báb’s own claim to receiving Divine Revelation. The talk will thus give an outline of the the Treatise, and also provide some general observations on the Báb’s Writings and on the approach that could be adopted when studying them.

Armin Eschraghi was born in Iran and raised in Germany. He obtained his M.A. (1999) and his Ph.D. (2004) in Islamic Studies from Goethe University in Frankfurt/Germany. He currently teaches at the Sankt Georgen School of Theology and Philosophy and at Goethe University. Among his publications are his dissertation on early Bábí and Shaykhí doctrine (2004) and his monograph on Bahá’u’lláh’s Epistle to the Son of the Wolf. He has also written several articles on the Báb’s and Bahá’u’lláh’s Writings in German, Persian and English language and is engaged in translating Bahá’í Writings into German.