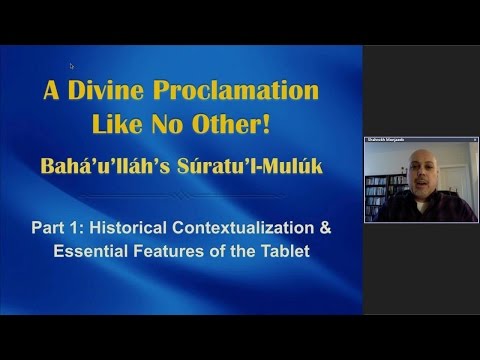 In the Summer of 1866, while exiled to the city of Edirne in the Ottoman province of Rumelia, Bahá’u’lláh indited a monumental document which not only inaugurated the final phase of “the Declaration of His Divine Mission” but set the stage for a prolific and intense seven year period of summons and proclamations to the world’s most powerful rulers.

In this seminal work, entitled Súratu’l-Mulúk or The Epistle of Kings, Bahá’u’lláh addresses many prominent figures of the mid-nineteen century world, including the European monarchs, the Sultan of Turkey and his highly influential ministers, foreign ambassadors of two nations, and the people of both Persian and the Ottoman Turkey.

By laying out the necessary historical background and highlighting some key features of the text, the presentation will attempt to offer a new systematic approach for the study of this momentous work, which Shoghi Effendi has ranked as the fourth most important emanation from Pen of the Author of the Bahá’í Revelation.

Shahrokh Monjazeb is a scholar of the Bahá’í history and sacred scripture. For over two decades he has been involved with the work of translating into English the writings of the Central Figures of the Bahá’í Faith. He is a published author and lecturer whose writings and presentations focus on Bahá’í Sacred Text and their literary and historical significance in the context of socio-spiritual condition of human society. Mr. Monjazeb has been a regular presenter at the annual conference of the Association for Bahá’í Studies since 1991 and is the author of a monograph on Bahá’u’lláh entitled Bahá’u’lláh: A Brief Survey of His Life & Works. He currently assists the Bahá’í World Centre, in limited capacity, with the translation of Bahá’u’lláh and ‘Abdu’l-Bahá’s writings from their original Persian and Arabic into English.

See All Articles
Home Articles & Videos Shahrokh Monjazeb, “A Divine Proclamation Like No Other! Baha’u’llah’s Suratu’l-Muluk (Epistle of the Kings)”