UN projections show global population reaching 11 billion—and the world economy growing by 500%—by the end of this century. Can the planet accommodate 4 billion more people when our current ecological footprint already exceeds Earth’s biocapacity by 60%? This question will preoccupy humanity throughout this century. Our mission is daunting: Somehow, we have to support 50% more people and raise billions out of poverty and reduce our ecological footprint to the sustainable level last found in 1976, when we were just 4 billion.

Clearly, humanity has to change direction. Yet every facet of our social-economic-political order—indeed the totality of the dominant global culture—programs us to maintain the status quo: perpetual material growth. Current models cannot generate the level of change that is demanded. Only a dynamic, grassroots capacity-building process, involving individuals, communities, and institutions, in neighborhoods and villages everywhere—linked together on a global scale—can make this transformation succeed. Making the world work for 11 billion people will be humanity’s greatest challenge. That we will unite to meet this ultimate challenge is neither a utopian vision, nor even a matter of choice. It is the next, inescapable stage in human evolution. 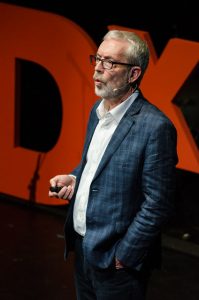 Paul Hanley has published four books and 1600 articles on the environment, sustainable development, agriculture, and other topics. He is editor and co-author of Earthcare: Ecological Agriculture in Saskatchewan (1980) and The Spirit of Agriculture (2005). Paul is a recipient of the Canadian Environment Award, the Meewasin Conservation Award, the Organic Connections Pioneer Organic Communicator Award, and the Saskatchewan Sustainability Award from the Regional Centre of Excellence for Education on Sustainable Development. His book ELEVEN (2014) was nominated for two Saskatchewan Book Awards and received the 2015 University of Saskatchewan President’s Award for Non-fiction and the 2015 Association for Baha’i Studies North America Award for Distinguished Scholarship. He was environment columnist with the Saskatoon StarPhoenix from 1989 to 2016. For more information: www.elevenbillionpeople.com.