Reports from Bahá’ís living in the United States about how the Climate Change course (faculty Christine Muller, Gary Colliver, Arthur Lyon Dahl, and Carole Flood) has changed their lives are frequent. Now it is a treat to hear from a learner in West Africa. Homa Sobhani Smith has been pioneering in Togo in West Africa for over thirty years. Now retired, she taught at the University of Lome in the Agronomy Department, work that required her to travel a lot throughout the country. During the past ten years she says she has observed widespread deforestation; studies of the area show that the average annual temperatures have increased over 1 degree Celsius. To obtain a better understanding of the problem the world is facing with climate change, Homa in 2015 took a three-month online course with Edx through the University of British Columbia. Then her sister told her about the course that Wilmette Institute offers on the same topic but with a spiritual orientation. At the beginning of the course, Homa said she was hopeful that she would enjoy this course as much as she did the one from the Canadian university. At the end of the course, she wrote:

I would like to thank the director of the Wilmette Institute and the mentors who guided the participants through this course as well as the participants who enriched the discussions with their thoughtful reflections.

Normally we excerpt comments from a student’s Learning Self-Assessment, but this time we are doing something different. In her Self-Assessment, Homa wrote about a number of things she had learned. When she came to the question about summarizing ways in which she could apply or use what she had learned, she wrote, “I have volunteered to present the ethical and spiritual principles of climate change during the International Environment Day on June 5 in a panel discussion organized by the National Public Relations Committee of the Togolese Bahá’í community.” Invited guests included representatives from the Ministry of the Environment, the United Nations Development Program (UNDP), and Non-Governmental Organization representatives (NGOs). Here we present Homa’s report on the panel, together with a link to the PowerPoint (in French) that she used. Congratulations to Homa for jumping into public discourse on a topic that requires worldwide education and action.

Report on the Panel Discussion on Climate Change, Held in Togo, West Africa, on the Occasion of the United Nations World Environment Day, June 5 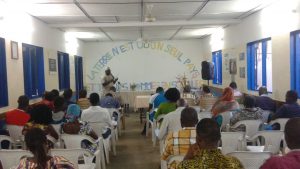 “I am pleased to inform you that the June 5 panel discussion organized by the Public Relations Committee of the Togo National Spiritual Assembly went very well. We spent almost two weeks before the panel contacting most of the NGOs who work on climate change. We sent a letter to the Resident Representative of the United Nations Development Program, requesting a delegate who could present the message of the Secretary-General of the United Nations, Ban Ki-moon, for World Environment Day. In addition to Mr. Kenkou, who read the UN statement, we had four panelists:

“My PowerPoint presentation summarized the Bahá’í International Community’s statement Shared Vision, Shared Volition: Choosing Our Global Future Together prepared for the twenty-first meeting of the Congress of Parties (COP21) in Paris in 2015. A major emphasis in my presentation was on the importance of unity of action and the role of individuals, communities, and institutions. The youth worked all morning before the panel to make a wall display proclaiming ‘The earth is but one country, and mankind its citizens.’ The NGOs present were very impressed with the display and took pictures.

“As not all of the participants (including the Bahá’ís present) work in the field of environment and do not know much about climate change, we excerpted a fifteen-minute segment on deforestation from the video entitled ‘Home’ to show the cause of climate change in Togo (mostly through deforestation) and its consequences. We showed the video before the panel discussion. Then the representative of the United Nations Development Program read the message from Ban Ki-moon on the occasion of World Environment Day. He was followed by the other panelists.

We had fifty-seven participants, including eighteen who were not Bahá’ís, mostly representing a number of NGOs. Each participant received a folder with copies of the statement of the Bahá’í International Community for COP 21; the message of the Secretary-General for World Environment Day; a summary of the agreement of 195 countries during the COP 21 in Paris; references in French on climate change that we found on Google; and a Bahá’í pamphlet.

“During refreshments, we provided a book exposition so that participants could look at Bahá’í books and Ruhi materials.

“The participants were very pleased with the panel and suggested that we continue our collaboration in the future. The Togolese Bahá’ís are preparing a letter to thank the participants and hope to have similar gathering again.

“The Wilmette Institute’s Climate Change course was a great motivator for me to become involved in the organization of the panel. Thank you all for your encouragement and patience and special thanks to Christine Muller, lead faculty for the course, who sent me some materials in French. That was a great help.”