Kevin Locke has recorded a third Deepen Webinar, this one on “Music and Native American Spirituality.” It is part of the Wilmette Institute’s course on Native American Religion and Spirituality, but is also for posterity. That means the Webinar, with Kevin’s wit, erudition, and humor, is available to all of us. You can access it here (it is on the Wilmette Institute’s YouTube channel), together with the slide show he used and the prayer-song of gratitude to the Great Spirit that he taught.

Comments posted after the conclusion of Kevin’s talk included these: “Profound insights.” “Quite instructional.” “Exceptional.” “Great.” “Quite enlightening.” “Thank you Wilmette Institute and Kevin Locke for keeping the music of Indigenous North Americans alive!”

Kevin always has a plan for his talks, and this one was no exception. He set out to share thoughts about how music is infused into all aspects of indigenous life, to explain facets of indigenous songs, and to teach his listeners a song. But he began with a question that seemed somewhat off-topic: Should we use “Native American” or “American Indian”? It is a question, he said, that is often asked.

The answer is this: “It depends on the country in which you reside.” The colonial powers in each country had different relationships and different treaties with the indigenous peoples. In Surinam or Guyana, the term is Amerindians. In Canada, depending on the treaty relationship, the term is First Nation or Status Tribe or Métis. In the United States, Congress has defined “American Indian” as a member of a federally recognized tribe. A “Native American,” again according to the U.S. Congress, can mean a Polynesian from American Samoa or the Hawaiian Islands; or a Micronesian from Guam; or a state-recognized tribe, especially in the eastern part of the United States; or someone who self-identifies as a Native American (for example, someone whose great-great-great-grandmother was Cherokee; or an Alaskan native; or an American Indian, a member of a federally recognized tribe. Kevin concluded by saying that he prefers the term “indigenous.”

Moving on to music, the topic of the Webinar, Kevin shared a passage about music from ‘Abdu’l-Bahá (in The Promulgation of Universal Peace 52, emphasis added):

The art of music is divine and effective. It is the food of the soul and spirit. Through the power and charm of music the spirit of man is uplifted. It has wonderful sway and effect in the hearts of children, for their hearts are pure, and melodies have great influence in them. The latent talents with which the hearts of these children are endowed will find expression through the medium of music. Therefore, you must exert yourselves to make them proficient; teach them to sing with excellence and effect. It is incumbent upon each child to know something of music, for without knowledge of this art the melodies of instrument and voice cannot be rightly enjoyed. Likewise, it is necessary that the schools teach it in order that the souls and hearts of the pupils may become vivified and exhilarated and their lives be brightened with enjoyment.

“Music,” Kevin said, is foundational worldwide, the “portal” through which children acquire vocabulary, sentence structure, syntax, idioms, richness of expression.” About the religion of indigenous peoples, Kevin quoted Charles Alexander Eastman, who wrote: “The religion of the Indian is the last thing about him that the man of another race will ever understand.” The goal of the Webinar, Kevin said, is “to make things clear and transparent” and “to give a tutorial about the structure of the Plains and Woodlands-style music”; to play some examples of such songs; and to teach a song.

Kevin stopped to sketch in the centuries of attempts to exterminate indigenous peoples, then to assimilate them, in boarding schools, by killing the Indian, but saving the man. This began to change in 1961 when President John F. Kennedy wrote an introduction to The American Heritage Book of Indians, saying “For a subject worked and reworked so often in novels, motion pictures, and television, American Indians remain probably the least understood and the most misunderstood Americans of us all.” During the 1960s, the indigenous culture including music that had gone underground finally began to resurface. 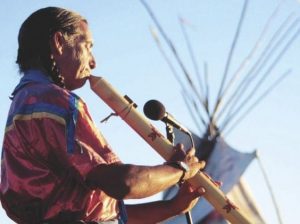 In indigenous culture, Kevin explained, music is the matrix of all aspects of life, the “heart of indigenous spirituality,” the vehicle through which the provisions of the Covenant are carried over time and through generations. The beadwork, the feather work, the quill work we see in museums only take their meaning in the context of music. Musicians are the most important people in a tribe. Today many people, wearing ear buds, use music to escape. But for indigenous peoples, music connects them with reality; to what is true, good, and real; with the dreams of their ancestors and the spiritual realm.

For the Lakota people, springtime comes after a long cold winter on the northern plains in the United States. The instruments that capture the coming of physical and spiritual springtime are the flute (the wind), the drum (the thunder), the rattle (the rain) and the human voice (lightening). In the same way that the Bahá’í writings use metaphors (the ocean and springtime) to talk about the spiritual springtime, so the Lakota prophetess, the White Buffalo Calf Woman, brought springtime when she sang: “With visible breath, I walk; something red [the Covenant] I bring.”

Near the end of the Webinar, Kevin taught his listeners a prayer-song of gratitude to the Great Spirit. The words to the song can be found on page 9 in the PDF of Music and Native American Spirituality Slide Show. For ease of use in learning the song, an excerpt from the Webinar pulls out the section in which Kevin teaches the prayer-song.

Kevin ended his talk with a Q&A session, fielding questions about pottery, music, dance (“Not optional for indigenous peoples, mandatory!”). In fact, his next talk will focus on dance.