Horace H. Holley: An Indispensable Man in the Development of the Bahá'í Faith 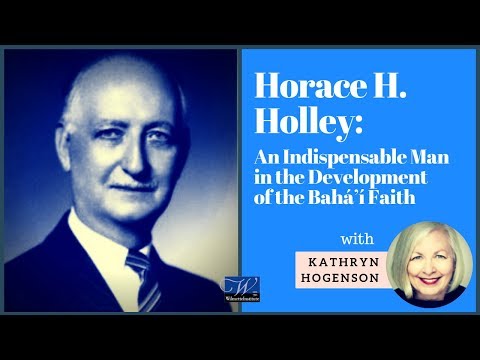 Hand of the Cause of God, Horace Hotchkiss Holley, served as secretary of the National Spiritual Assembly of the United States and Canada from 1925 until 1959 (except for a brief period). A renowned poet, essayist, playwright, businessman, thinker, he was the most unlikely of men to undertake a pivotal role in the development of the Administrative Order. He became the “Pen of the American Bahá’í Community”–as his colleague Dorothy Baker called him. In his role as publisher, writer and editor, he gained a deep and insightful knowledge of the teachings of his beloved Cause. But his is not merely a story of how his genius for understanding government and the world of words helped to create a new way in which to give structure to religious truths and to promote those teachings. It is primarily the story of his inner spiritual journey and recreation that were the fruits of a life of personal tragedies and tests. He gained the honor of being appointed a Hand of the Cause of God not merely through tireless administrative service, but as a result of his own spiritual transformation. The last years of his eventful life were spent traversing the globe on behalf of Shoghi Effendi. After the Guardian’s passing, he again took up his pen, but this time in service of the Hands during the period of the Ministry of the Custodians. A quiet, often misunderstood man, he deserves to be remembered as one of the great champion builders of the Cause of Bahá’u’lláh.

Kathryn Jewett Hogenson, a native of Richmond, Virginia, is a graduate of Emory & Henry College and the University of Virginia School of Law. She has worked as an attorney and as a researcher for the International Teaching Center at the Bahá'í World Center. Currently she is the senior consultant for the Office of Community Administration at the Bahá'í National Center. A lifelong student of history and government, she is the author of Lighting the Western Sky: The Hearst Pilgrimage and the Establishment of the Bahá'í Faith in the West (George Ronald Books, 2010), as well as the co-author of another book about history. She is currently researching a biography on Hand of the Cause of God, Horace Holley and the establishment of the Bahá'í Administrative Order. She lives in Florida with her husband, Gary Hogenson. They have two daughters and two grandchildren.

See All Articles
Home Articles & Videos Horace H. Holley: An Indispensable Man in the Development of the Bahá’í Faith