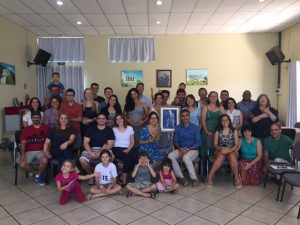 Attendees at the class in Mogi-Guaçú, March 2017

The Wilmette Institute offered its first course in Brazil and in Portuguese in the spring of 2017 in collaboration with the Bahá’í Regional Council of Southeast Brazil, a first for both. The course, Creating a Coherent Marriage, Family, and Community Life, ran from March 17 to April 30, with an in-person weekend in Mogi-Guaçú from March 24–26. The online portion of the course happened before and after the in-person weekend.

The content of the course, which has also been offered in English by the Wilmette Institute, was translated from English into Portuguese. The course had two Brazil-based faculty members, Nahid Shams and Fariba Vahdat, who also served as co-lead faculty with Susanne Alexander from the United States. Susanne’s role was primarily in preparing the English materials and coordinating the planning, but she was also able to do a brief joyful videoconference with the in-person participants.

Attendees included fifteen couples from the southeast region of Brazil, most of whom serve agencies and institutions in the region. Among the couples, 23 percent are in interreligious marriages, and 58 percent have interracial or intercultural marriages. The ages of the participants ranged from twenty-five to sixty years. This diversity of people and ages was very positive for the course.

At the end of course, twenty-six participants answered an evaluation questionnaire. Of that number, 100 percent said they were satisfied or very satisfied with the workshop and its content, and 88 percent said they had acquired important skills for their marriage. They all agreed that they had learned new knowledge about building communities and acquiring new skills to live a more coherent life. 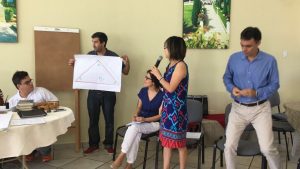 Those participating in the questionnaire also expressed appreciation for the opportunity to reflect on the sacred texts and current messages of the Universal House of Justice from the perspective of daily life, marriage, neighbors, and community life, as well as for the importance of having a favorable environment in which to reflect. They noted that the time spent exchanging experiences with other couples was very precious. They observed that the opportunity to reflect on and evaluate the central issues of their relationships and the relationship between their marriages and community life are not common or easy in everyday life. Of the twenty-six filling out the questionnaire, 89 percent said they would be interested in attending additional sessions on marriage.

The faculty who taught Creating a Coherent Marriage, Family, and Community Life hope that this will be the first of many partnerships between  Bahá’í institutions in Brazil and the Wilmette Institute. Such collaborations will provide the Brazilian community with the opportunity to strengthen the sacred institution of marriage and strengthen families.