↓ Skip to Main Content
Home › Courses › “Clouds of Jabarút – Mountain of Malakút”: A Drawing and Interpretation

“Clouds of Jabarút – Mountain of Malakút”: A Drawing and Interpretation

Some of you may know Paula Bidwell, a Native American Bahá’í of mixed Indian blood with some Northern Italian from her mother, as Lead Faculty for the Wilmette Institute course Native American Religion and Spirituality. Others may remember her from two articles about reframing the Thanksgiving story, published in the November and December 2013 issues of the Wilmette Institute’s eNewsletter: “Rethinking Thanksgiving—And How You Can Reframe Your Celebration” and “Many Hoops Website Clarifying the True Story of Thanksgiving Expands Its Content and Audience.” What you may not know about Paula is that she is an accomplished artist and writer. For the Wilmette Institute’s course Bahá’u’lláh’s Revelation: A Systematic Survey 2012, she explains her final project this way:

“The Wilmette Institute course Baháˈuˈlláh’s Revelation: A Systematic Survey 2012 brought forth many understandings and awarenesses previously unattainable. What made this possible was the encouragement and willingness of the instructors, Dr. Moojan Momen and Dr. Christopher Buck, to discuss my Native American background in connection to the Bahá’í writings.

“One of the awarenesses that evolved from this course was that the Native tradition of orally transmitting knowledge will probably always remain, but we also have to consider that writing and reading can be a complimentary process. With this in mind, as I was considering my ﬁnal project for the course, I realized that art can be a link from oral to written tradition. Oral tradition engages the heart and mind through speech. Written tradition engages the heart and mind through sight. Reading aloud combines both, and a piece of art, which can be considered written, can also be read aloud.

“Everything in my drawing is symbolic and can be read as a story or as individual chapters in a book. I maintain that when the symbols and alphabetic metaphors are understood, this drawing can be read aloud. In this manner I would like to offer a piece of art as a method of transition and combination between oral and written tradition. 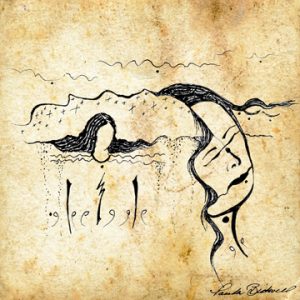 The Symbols and Metaphoric Alphabet

Primal Point – The entire Persian/Arabic alphabet is not only understood through sight and intellect, but can be mystically understood through sight and imagination. A recurring element in the drawing is the Persian/Arabic letter “B”. This letter represents the Primal Point, which sits directly beneath the Hem of the Robe. The Primal Point represents the ultimate connection between the Creator (Primal Will) and creation. In the Bahá’í writings, the Báb is the “Primal Point” around which the Prophets of the past circle. The hem of the robe, according to Bahá’u’lláh, is “the hem of the robe to which have clung all in this world and in the world to come.”1

I remember reading a story about the houri crying tears, and when the tears arrived on earth, they became a singular dot of black ink. This, for me, is the Primal Point. In my personal experience, tears have a mystical meaning. When I completed a ceremonial fast, the medicine person conducting the ceremony noticed my dress had spots of blood right over my heart. He said that, when I was praying for the people, I cried tears of blood. My experience is just a human experience, but it creates a connection for me. Also, in my traditions, it can be said that prayers manifest in the physical world as tears. The Lakota world for prayer ceya is the same as the word for cry.

Clouds – The clouds with the “B” (Primal Point) in the middle are representative of the clouds of unknowing, which I call the “Clouds of Jabarút.” In my understanding, Jabarút is the world where the holy or sacred remain hidden or concealed. The clouds in this drawing partially disguise the Primal Point. You have to look closely to see the letter “B”.

Mountains – The mountains in this drawing are indicated but not strongly imaged because they are meant to represent the world of Malakút, the world after death. I added the crosses as symbols for stars that in Lakota tradition indicate our ancestors or those living in the world of Malakút. I have named this mountain the “Mountain of Malakút.”

Faces – In the drawing there are two human images. One is a face including a torso, and the other is the face only. The face on the right with the features of nose, eyes, and mouth express the realm of Násút where the ﬁve senses or powers as deﬁned by ‘Abdu’l-Bahá exist. These powers are sight, hearing, smell, taste, and feeling/touch.2 This face also represents the human spirit or nafs. It is represented without a torso or any other body part which signiﬁes the incompleteness of this earthly existence—an existence that can only manifest as a reﬂection or illusion.

The face on the left without these features represents the soul or ruh, which exists in the invisible and hidden parts of the earth existence and encompasses spiritual power. The long black hair is representative of Baháˈuˈlláh’s imagery of the houris or Maid of Heaven. The ﬁgure contains a torso, which represents a more complete existence.

On both faces there appears the letter “B”. The face on the right representing existence in the world of Násút has the “B” at the throat and lips representing the Primal Point expressed through song or speech and between the eyes representing understanding of the Primal Point through sight. The Primal Point is also seen in the hair that appears to be ﬂying in the wind. I am illustrating the ability we each have of carrying the Message. Hair is particularly signiﬁcant not only in the writings of Baháˈuˈlláh, but in a scientiﬁc sense that it carries our DNA or genetic inheritance. In my personal understanding, the message of Baháˈuˈlláh rides on the wind, and in this instance it rides on hair ﬂowing in the wind.

The ﬁgure on the left without human features is representative of the soul or ruh, which is invisible to the eye, yet is eternal and encompasses spiritual power. The waving lines represent water or, in Lakota understanding, “the blood of the earth.” The essence of water is life-giving. The water may also remind us of the ocean of His words. There are many signiﬁcant meanings of water in the writings of Baháˈuˈlláh. What I have intended is just a reminder of this.

I have placed cascading dots to represent water, as rain reminds us the Message can be torrential or gentle depending on our needs. It is ever present in our soul.

The ﬁgure on the left represents the soul or ruh and connects to the face on the right through the temple representing the dream world or imaginal world. It also is indicative of the “common faculty” that ‘Abdu’l-Bahá deﬁnes as containing both physical and spiritual powers and acts as a communicator between the outer and inner powers.3

Progressive Revelation – Also in this drawing is the recurring theme of the letters waw (Arabic) or vav (Persian), which represent the concept of progressive revelation. All of the Manifestations of God can be “seen” in this combination of letters. The waw on the left symbolizes previous Manifestations; the upright Alef in the center is the Báb; the waw on the right is Baháˈuˈlláh. I have taken artistic license in my rendering of waw by changing the w to face each other or to face away from each other. I did this as a way of stating facing inward and facing outward in respect to our human visionary understanding—although, the only inward facing w is in the center of the ﬁgure on the left representing the soul or ruh.

Toward the bottom of the drawing on the torso of the faceless ﬁgure are three waw. The center waw has a lightning bolt arising from the top reaching for the Primal Point. This is a Native American image of the power of wakinyan or thunder beings. Thunder and lightning are created by an electric charge frequently emanating from inside a cloud. This electric charge descends to earth and upon touching the ground creates the sound of thunder and the visual of lightning. Most Native traditions recognize the tremendous power of this action. I recognize it as the tremendous power of the message of Baháˈuˈlláh, and thus it progresses toward the higher realms through the Primal Point.

When the waw is illustrated in the face on the right, it is positioned at the throat. The throat is one of the most vulnerable points in the body. The main artery of the heart is easily accessed at this physical point. Consequently, if the throat is cut, it would result in death. Because of this, it is in need of protection. The throat is also a place where the vibration for sound or speech is created. Both aspects of the throat, as a place needing protection and a place for speech, connect to progressive revelation. Regarding vulnerability and protection, we have seen the persecution of the Bábís and Bahá’ís when they refuse to deny their belief in the message of Baháˈuˈlláh. Through the voice emanating from the throat we share the message of Baháˈuˈlláh in this earthly realm.

As another note, the “reading” of this drawing may occur in three visual directions or movements. The drawing can be “read” from top to bottom, right to left or left to right. These are the same directions languages are written and read. For example: Persian from right to left, Chinese from top to bottom, English from left to right. The drawing’s meaning changes if one were to try to read or interpret it from bottom to top. Thus not every direction is represented, which illustrates the limits of the physical world.

It is my hope this drawing will enable a verbal and visual storytelling of complex topics that will reach a universal and ageless audience. These symbols can lead to stories of the martyrs, stories of teaching, lessons in the various worlds of God, and many other themes necessary to our understanding of the Bahá’í writings. I hope I have been of service with this endeavor.