Century of Light: A Wall-Hanging Quilt, Spirit-Book Drawings, and a Fiber Project

Art is in the air, and it does not seem to matter which Wilmette Institute Course is involved. This time three learners in Century of Light 2017 (faculty, Barney Leith, Robert Wilson) have been inspired to create works of art as their final projects in the course.

Elisabet (Bets) Mitchell is a retired physical therapist and lecturer, who spent most of her adult life studying and working in the UK and has now moved back to Sweden, where she and her Scottish non-Bahá’í husband live in the forest outside Uppsala. They are learning about rural life after living all their lives in towns. In the UK, Elisabet was involved in interfaith activities and with children’s classes and child protection. In Sweden she is continuing as a Ruhi tutor and is also working with a church group in supporting children and adults in an asylum seeker’s center in her neighborhood. For her final project in the course, Elisabet chose to make a wall-hanging quilt. She describes her project this way, with many thanks to her patchwork teacher Ingrid Munkfors. —THE EDITORS

I came upon a technique called harmonic convergence quilting, which I thought could depict the main theme of the text. The idea of the convergence quilt was conceived by an American musician and quilter Ricky Tims.

The theme of the t 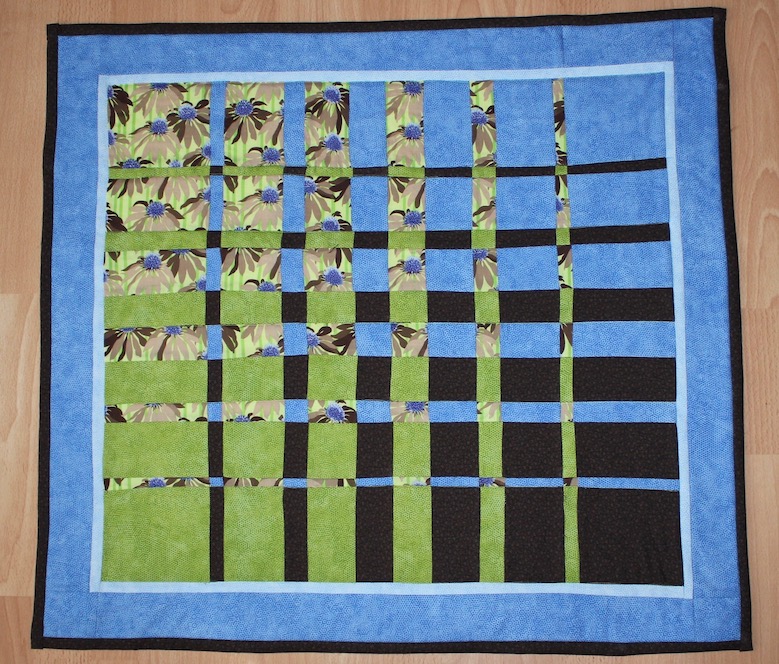 ext Century of Light is summarized by the Universal House of Justice as “the relationship between two historical developments that the Will of God propelled forward along converging tracks” (143). These developments were the disintegrative and integrative events of the twentieth century.

I show the disintegrative events as dark and the integrative events as light colors in the quilt with the colors converging from small patches to gradually larger patches of light color along the timeline right to left. This attempts to show the radiance of the Century of Light (called so by ‘Abdu’l-Bahá because the universal recognition of the oneness of humankind would be achieved in this century [127]).

The dark color provides the contrast and depicts the struggles and suffering taking place in the twentieth century, which should lead to awakening of people to the understanding that we are totally reliant on each other for a peaceful world.

I bought the flower-patterned cloth on a visit to London a couple of years ago, when I also visited the Guardian’s grave. It reminds me of the Guardian’s ceaseless work to develop Bahá’í communities worldwide and the beautiful buildings and gardens in the Holy Land. This is a beginner’s quilt with some crooked lines, which reflect my path of learning. 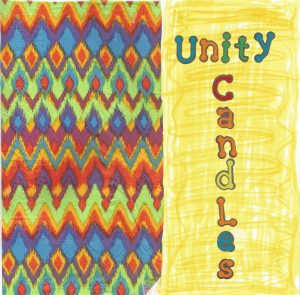 Grace Reed became a Bahá’í after a sweat lodge (prayer lodge) ceremony in the early 1980s, during which she had a vision of ‘Abdu’l-Bahá. But she did not know Who He was until a Native American Bahá’í friend who said prayers during the ceremony showed her His picture. Then Grace realized she had to follow this path. Two years earlier she had started on a spiritual path through Alcoholics Anonymous and Narcotics Anonymous. Her new path took her to homefront pioneering; a pilgrimage to Haifa; international pioneering in Norway, Sweden, and Finland; extensive travel in Russia and the Baltic states sharing the Hopi prophecy about the Bahani people (the Bahá’ís); pioneering in Alaska; and now to Portland, Oregon, USA. With George Ronald, Grace published Negotiating Shadows (2012), in which she connects the altruistic movement of Alcoholics Anonymous with the Bahá’í teachings. Below is some of what Grace wrote in her Learning Self-Assessment for the Century of Light 2017 course and her comments about her final project—drawings based on ‘Abdu’l-Bahá’s seven candles of unity.—THE EDITORS 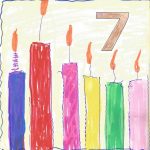 Group/Mentors/Staff—All: Thank you all for your help and participation that helped me learn more about our important Faith and its place coming into time ahead toward the end game of World Peace, Unity, and Oneness—sacred goals. I found it deepened me and made me more committed to doing what I can to bring more peace to Mother Earth and her children in my little patch of land and arena. . . .

My art project is based on the seven candles of unity described by ‘Abdu’l-Bahá (Century of Light 127–28). I produce spirit books (small custom-made booklets for conflict resolution, stress management, or inspiration for individuals experiencing various issues) and will be presenting the candle book that uses the material learned here and my poetry as a response to a yearly Pie and Poetry event at the Universalist Unitarian church in my neighborhood in June. 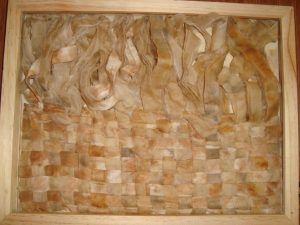 We caught up with Gretchen Misselt (a veteran of seven Wilmette Institute courses) as she was wrapping up a three-week visit with family in South Africa and facing a three-day journey home, where she promised to finish the fiber-arts project she undertook as her final project in the Century of Light course. In spite of coming home with a bad cold, she managed to complete her arts project. Here is what she wrote about the course and about her project.—THE EDITORS

I hated for this course to end. I enjoyed it very much. I read Century of Light when I got it but not in the depth this course required. . . . I loved getting the history of an entire century and was amazed at the tremendous progress that the Faith made in what actually is a short time. It has energized me and encouraged me. I discussed the course briefly at Feast and hopefully passed on my enthusiasm. One can get discouraged by current problems and attitudes, but now I know this will pass and progress will be made.

My final project is two art pieces with the theme “disintegration and integration.” Both are fiber pieces. . . . For both, I have strips of silk gauze that have been in a rust bath and are shades of light to dark rust. On one piece (right), the strips are a coil which is loose but tightens into an oval. In the other piece (above) random strips work into woven strips in part of the piece.