↓ Skip to Main Content
Home › Learners › Ain’t I a Woman: The Re-Mix

Ain’t I a Woman: The Re-Mix

When Hermione C. Pickens joined the Wilmette Institute’s course Racism in America: The Most Challenging Issue June 2018, she greeted her fellow learners with a chatty autobiographical paragraph:

Greetings all! I’m Hermione C. Pickens, a sixty-six-year-old grandmother of three residing in a fairly new seniors’ community in Detroit, Michigan, USA. Mr. Marvin Hughes and Mrs. Ruth Chisholm Williams were my Bahá’í Sunday School teachers back in the 1950s. I turned twenty-one in December 1972 and was elected to my first Spiritual Assembly the following April (Royal Oak Township, Michigan). I have served on spiritual assemblies and in many other capacities within the Bahá’í Faith since then, including as current Treasurer of the Detroit Spiritual Assembly. I have thrice been on pilgrimage and look forward to the next sometime after 2020. My primary passions are study of the Bahá’í writings, writing, reading, and singing. There are a number of secondary/terciary/quaternary interests with which I have been or may be preoccupied as well. The time is so now for this course on Racism in America! Looking forward to discoveries, confirmations and true enlightenment.

For her final project for Racism in America, Hermione prepared and recorded a presentation of Sojourner Truth’s iconic “Ain’t I a woman” talk delivered in 1851 at the Ohio Women’s Right Convention in Akron, Ohio, USA, adding quotations from the Bahá’í writings between Sojourner’s statements, many of which end with “And ain’t I a woman?” Sojourner, who escaped slavery, was an abolitionist and a women’s right activist. Smithsonian magazine has called her one of a hundred “Most Significant Americans of All Times.” Here is a link to Hermione’s presentation, and below is the text of the presentation.—THE EDITORS 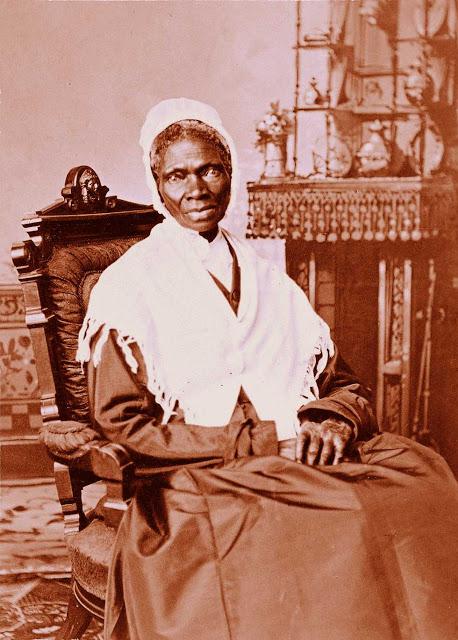 Ain’t I a Woman? The Re-Mix
by Hermione C. Pickens
2018 Detroit, Michigan

Well, children, where there is so much racket there must be something out of kilter.
I think that ‘twixt the negroes of the South and the women at the North, all talking about rights,
the white men will be in a fix pretty soon. But what’s all this here talking about?

“And among the teachings of Bahá’u’lláh is the equality of women and men. The world of humanity has two wings—one is women and the other men. Not until both wings are equally developed can the bird fly. Should one wing remain weak, flight is impossible. Not until the world of women becomes equal to the world of men in the acquisition of virtues and perfections, can success and prosperity be attained as they ought to be.”
……………………………….‘Abdu’l-Bahá, Selections from the Writings of ‘Abdu’l-Bahá 227: 302

That man over there says that women need to be helped into carriages,
and lifted over ditches, and to have the best place everywhere.
Nobody ever helps me into carriages, or over mud-puddles, or gives me any best place!
And ain’t I a woman?

“The status of woman in former times was exceedingly deplorable, for it was the belief of the Orient that it was best for woman to be ignorant. It was considered preferable that she should not know reading or writing in order that she might not be informed of events in the world. Woman was considered to be created for rearing children and attending to the duties of the household. If she pursued educational courses, it was deemed contrary to chastity; hence women were made prisoners of the household.”
……………………………….‘Abdu’l-Bahá, The Promulgation of Universal Peace 166

Look at me! Look at my arm! I have ploughed and planted,
and gathered into barns, and no man could head me!
And ain’t I a woman?

“Know thou, O handmaid, that in the sight of Bahá, women are accounted the same as men, and God hath created all humankind in His own image, and after His own likeness. That is, men and women alike are the revealers of His names and attributes, and from the spiritual viewpoint there is no difference between them. Whosoever draweth nearer to God, that one is the most favoured, whether man or woman. How many a handmaid, ardent and devoted, hath, within the sheltering shade of Bahá, proved superior to the men, and surpassed the famous of the earth.”
……………………………….Selections from the Writings of ‘Abdu’l-Bahá 38: 79–80

I could work as much and eat as much as a man—when I could get it—and bear the lash as well!
And ain’t I a woman?

. . . women have assumed the attributes of men in showing forth steadfastness in the Cause of God, and revealing the heroism and might of fearless men. They invaded the arena of mystic knowledge and hoisted aloft the banner on the heights of certitude.
……………………………….‘Abdu’l-Bahá, in The Compilation of Compilations II 2100: 360

I have borne thirteen children, and seen most all sold off to slavery,
and when I cried out with my mother’s grief, none but Jesus heard me!
And ain’t I a woman?

“Render thanks to the Lord that among that race thou art the first believer, that thou hast engaged in spreading sweet-scented breezes, and hast arisen to guide others. It is my hope that through the bounties and favours of the Abhá Beauty thy countenance may be illumined, thy disposition pleasing, and thy fragrance diffused, that thine eyes may be seeing, thine ears attentive, thy tongue eloquent, thy heart filled with supreme glad-tidings, and thy soul refreshed by divine fragrances, so that thou mayest arise among that race and occupy thyself with the edification of the people, and become filled with light.”

This Tablet was addressed to one Mrs. Pocohontas in Washington. According to Fádil Mazandarání, the recipient of the Tablet was a black woman. See “Táríkh-i-Zuhúu’l-Ḥaq”, vol. 8, part 2, p. 1209 (Ṭihrán: Bahá’í Publishing Trust, 132 B.E.). Additional information provided by the Archives of the National Spiritual Assembly of the United States indicates that Mr. Louis Gregory, in a history of the Washington, D.C. Bahá’í community, mentions a black Bahá’í, Mrs. Pocohontas Pope, who is likely the same person. Mrs. Pope learned of the Bahá’í Faith through Alma and Fanny Knobloch and Joseph and Pauline Hannen. There is, at present no other information on Mrs. Pope.—Women, comp. Research Department of the Universal House of Justice (Canada: Bahá’í Canada Publications, 1986) 5–6

Then they talk about this thing in the head; what’s this they call it?
[member of audience whispers, “intellect”] That’s it, honey.
What’s that got to do with women’s rights or negroes’ rights?

“In the world of humanity . . . the female sex is treated as though inferior, and is not allowed equal rights and privileges. This condition is due not to nature, but to education. In the Divine Creation there is no such distinction. Neither sex is superior to the other in the sight of God. Why then should one sex assert the inferiority of the other, withholding just rights and privileges as though God had given His authority for such a course of action? If women received the same educational advantages as those of men, the result would demonstrate the equality of capacity of both for scholarship.”
……………………………….‘Abdu’l-Bahá, Paris Talks 50.5: 169–70

If my cup won’t hold but a pint, and yours holds a quart,
wouldn’t you be mean not to let me have my little half measure full?

“The whole duty of man in this Day is to attain that share of the flood of grace which God poureth forth for him. Let none, therefore, consider the largeness or smallness of the receptacle. The portion of some might lie in the palm of a man’s hand, the portion of others might fill a cup, and of others even a gallon-measure.”
……………………………….Bahá’u’lláh, Gleanings from the Writings of Bahá’u’lláh 5: 8

If the first woman God ever made was strong enough to turn the world upside down all alone, these women together ought to be able to turn it back and get it right side up again!
And now they is asking to do it, the men better let them.

“As long as women are prevented from attaining their highest possibilities, so long will men be unable to achieve the greatness which might be theirs.”
……………………………….‘Abdu’l-Bahá, Paris Talks 40:33: 136

Obliged to you for hearing me, and now old Sojourner ain’t got nothing more to say.