↓ Skip to Main Content
Home › News › Afnan Library Opens in U.K.: Where There Is a Will, There Is a Way

February 12 is a special day for the Bahá’ís in the U.K. On that day in 1980 the Hand of the Cause of God Hasan M. Balyuzi (1908–80), a distinguished Bahá’í, scholar, historian, writer, and BBC radio announcer, died. The opening of the Afnan Library thirty-five years later to the day brought to fulfillment a wish Mr. Balyuzi expressed in the codicil to his will: that his enormous collection of papers and books be made available in a research library “for the benefit of all who seek knowledge.” 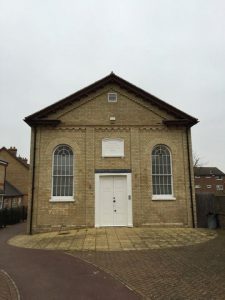 On February 12, 2015, at 10:30 a.m., the Afnan Library Trust held the formal opening ceremony for some thirty-five special guests at the renovated former Baptist chapel in Sandy, Bedfordshire, near Cambridge, about forty-five minutes north of London. The Honorable Barney Leith, OBE, represented the National Spiritual Assembly of the Bahá’ís of the United Kingdom, speaking briefly about his involvement with the Library for many years. Mr. Balyuzi’s son, Robert Balyuzi, represented the Balyuzi family. Dr. Moojan Momen represented the Trustees of the Afnan Library Trust and spoke about Bahá’í scholarship. The High Sheriff of Bedfordshire, Mr. Colin Osborne, MBE, JP, formally opened the Library, saying that he wished “the library every success” and hoping “that everybody that comes along finds it peaceful and tranquil, and is able to do the research they want to.” 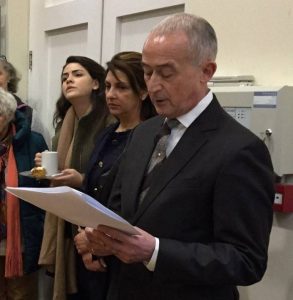 Mr. Robert Balyuzi spoke lovingly about his father and his “life-long love with books”; three previous unsuccessful attempts to open the library; the contributions, volunteer and monetary, to the library; and the esteem with which Shoghi Effendi, the Guardian of the Bahá’í Faith, held his father.

Following the formal opening, the Afnan Library, from 11:30 a.m. to 8 p.m., hosted neighbors of the building, the local librarian, local councilors, the Sandy Historical Society, Bahá’ís from around the U.K., those who had helped with the library over the past thirty-five years, and many others. Approximately 100 people attended the opening.

The Afnan Library holds some 10,000 books and vast quantities of manuscripts, handwritten letters, maps, documents, periodicals, photographs, and unpublished items, some dating back to the nineteenth century. Important collections (many from Bahá’ís important in British Bahá’í history) include those of Hasan Balyuzi, Phillip Hainsworth, Hormuzdiar Sabet, Dorothy Ferraby, Abul-Qasim Afnan (Mr. Balyuzi’s great-grandfather), Claudia Coles, and Betty Reed as well as books in Arabic and Persian from an office of the Universal House of Justice, photocopies of 80 volumes of manuscripts from the Iran National Bahá’í archives, and Bahá’í periodicals from around the world. 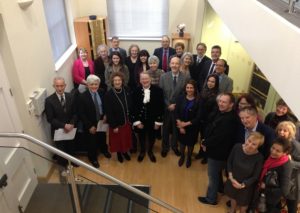 Now that the Afnan Library is open it is looking for a qualified volunteer librarian (who, ideally, reads English, Persian, and Arabic) for cataloguing, advice on conservation, and supervising researchers and visitors. It also needs modern library cataloguing software and retrieval systems, and rare Bahá’í books, periodicals, and manuscripts.

The Library will be open by appointment, according to Dr. Momen, who observed that it is “unique in the world because there isn’t anywhere else where you can go and get access to this amount, range, and depth of Bahá’í materials.”

The Afnan Library Trust was established as an independent charity in 1985. Mr. Balyuzi himself nominated the Trustees, which include the National Spiritual Assembly of the Bahá’ís of the United Kingdom, his son Robert Balyuzi, and Dr. Momen. 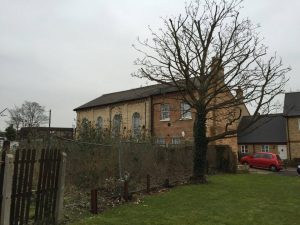 Afnan Library from the rear, showing how large the building is

The name of the Library comes from Mr. Balyuzi’s lineage, for he was an Afnán, a descendant of the Báb, the forerunner of Bahá’u’lláh, the founder of the Bahá’í Faith. Mr. Balyuzi’s great-grandfather (and that of Shoghi Effendi) was Hájí Mírzá Abu’l-Qásim, one of the two brothers of Khadíjjih-Bagum, the wife of the Báb. Bahá’u’lláh called upon the Afnán to “perform praiseworthy deeds” and to be an example of steadfastness to other Bahá’ís. Surely the recently opened Afnan Library will serve for all time to remind its users of the “praiseworthy deeds,” the “upright character,” and steadfastness of its founder, Mr. Hasan Balyuzi.