↓ Skip to Main Content
Home › Courses › A Tribute to Paula Bidwell (1953–2016): An On-Ramp to the Freeway of Knowledge about Native People: Journeys in Understanding

A Tribute to Paula Bidwell (1953–2016): An On-Ramp to the Freeway of Knowledge about Native People: Journeys in Understanding

Generally when the Wilmette Institute writes about what its learners get out of the courses they take, we select one student and discuss his/her learnings in detail. This time we are taking a different approach with a tribute to Paula Bidwell, who passed away on September 16, 2016. Paula, a Wilmette Institute learner and faculty member, was a Native American Bahá’í of mixed-Indian blood—Lakota, Cherokee, Shawnee, Delaware, and Seneca—with some Northern Italian from her mother. We have selected six learners enrolled in the last course she created, Native American Religion and Spirituality (faculty: Paula Bidwell, Kamao Cappo, and Richard Hainsworth), and are sharing their comments on a number of themes. The comments these six posted in their Learning Self-Assessment at the end of the course are a living tribute to how much Paula’s insights, deep learning, and spirituality affected those who came in touch with her as friends and learners.

Let’s start with Adib Ighani, a Persian who immigrated to Canada, then to the Emirates, and finally to Shanghai. In his short post, he wrote succinctly about what his participation in the Native American Religion and Spirituality course meant to him, how he shared the readings with his family and consulted about them, and how much he appreciated the faculty and his fellow learners:

I truly enjoyed taking this course. Although I was not able to place a post in each unit, I managed to read most of the participants’ posts as well as the material and watched a few video clips. I shared some of the topics/issues (for example, the Standing Rock issue, the Truth and Reconciliation Commission report, Ruhíyyih Khánum’s letter, the residential schools, stereotypes, Indian mascots) with my family and discussed them at the dinner table and during our family-reflection time. I think the highlight of my readings was the article “The Soul of the Indian” by Charles Alexander Eastman. I like the fact that most of the articles were only a few pages long and easy to follow. This course has provided me with useful background about the history, culture, and challenges of the Native peoples of the United States and Canada. I hope to make a summary in PowerPoint form and share it with others in the future. My sincere gratitude to the course organizers and the participants.

Now let’s get to know a bit about the remaining five learners we have chosen from Paula’s course.

Not every learner wrote about every topic in the Learning Self-Assessment, but all of them had something to say about what they had learned in the course, and five of the six undertook or plan to undertake some sort of final project. Let’s being with the learners new understandings and new insights.

Kathryn Brown reported that she has “had a few discussions [with the Lakota who come to her farm in Wisconsin] about ceremonies and how the meaning has changed over time, as have the reasons that people come to them. And they have shared with me how hard it is to sustain Inipi and Chanupa ceremonies in city settings since they are anchored in ancestral lands and sacred spaces.” She also says that she has “a new understanding of the pain and alienation associated with holidays, specifically the Fourth of July, Columbus Day, and Thanksgiving, and is better able to have a meaningful conversation of the topic.” “More significantly,” she goes on to say that she has “a deep appreciation for why the atrocities of the past, despite the passing of decades and even centuries, continue to be a source of mourning. As Jacqueline Keeler explains in a short article, events such as Wounded Knee separate Native peoples from the mainstream culture as we do not commemorate such events and grieve together.”

Jane Harper wrote that she came away from the course with “a better understanding of American history.” “As a New Englander,” she said, “I was fed a very sanitized version of events. It was painful to learn the disgusting truth. . . . Also, the articles that explored the difference between cultural exchange and cultural appropriation opened my eyes.” By “cultural exchange,” according to Jarune Uwujaren, “is meant an exchange that represents an open, willing participation in sharing cultural elements by inviting interest and reciprocity of exchange. She says that “there needs to be some element of mutual understanding, equality, and respect for it to be a true exchange.”

Allison Maires said she is being led by her heart “in ways that Native teaching can support” her growth as a Bahá’í. She says she will be rereading all the indigenous teachings and prophecies, especially the articles and videos by Phil Lane. “It means the world to me,” she said, “that my faith supports Native American spirituality and prophecy.”

Gretchen Misselt, from Wisconsin, researched the Pottawatomie and Oneida tribes and did extra reading, and compiled a wish list of readings.

Janice Okuma, writing a summary of what the Ventura, California, Group, learned, explained that “The scope of the course was different from we thought at the beginning. I think I can speak for the four of us when I say we thought the class was going to be only about the spiritual aspects of Native Americans’ religion. I think we did not really understand that to understand this, we had to understand the history and lives of The People. We needed to be aware of their languages, history, and current injustices to better understand their beliefs. This has been like an “on-ramp to the freeway of knowledge about Native People. We have been amazed at their resilience and endurance and the fact that they could keep their culture, customs, and often their languages when under so much oppression.”

Kathryn wrote that her “ability to explain history with some facts and references will help with overcoming stereotypes when I encounter them.”Jane now knows “the importance of listening, and stepping outside” her “comfort zone, both culturally and spiritually. I feel more open-minded and ready to learn other ways of thinking, seeing, being in community. I am ready to listen and learn, rather speak and instruct.” Gretchen found that “Native American religious life inspired” her to take her “own spiritual practice deeper.” She relates “to the respect for nature, the concept of God, and family values.”

Kathryn was more “sad and appalled by the history” of her country, “angrier about the racist aspects of our national holidays,” and “appalled at the events in our time.” Janice, again speaking for the Ventura, California, Group, said that the course “has deepened and strengthened our beliefs concerning the Native Peoples. We all seem to be amazed by their courage and enamored of their ability to put into practice the belief that God is in everything—‘all my relations’ is a beautiful way of stating this.’”

Changes in Values or Beliefs.

Kathryn said that she now has “a clearer picture of areas on Native spirituality that fit with the Bahá’í Faith and how to integrate Lakota ceremonies that take place on” her farm with her Bahá’í beliefs.” Now she holds the “two different religions” together in her “being, like the blended colors of a sunset.”Jane’s pivotal change, as a former American Catholic who was taught that the land was a resource over which humans had “dominion,” was being “reeled back to this core truth: the land is sacred, including its trees, plants, water, animals, and people.”

Kathryn said she will now “recognize cultural misappropriation and speak out about it,” will explain the need to abandon mascots that use Native names and images wrongfully, under the lame excuse of ‘honoring the culture,’” and “explain why phases such as ‘Have a pow pow,’ ‘they need to smoke the peace pipe,’ or ‘off the reservation’ are offensive and inappropriate.’” By “cultural misappropriation,” Kathryn explained, she means the adoption of cultural rituals and objects by the dominant culture, using such objects and practices for profit, changing sacred ceremonies to a form of entertainment, and engaging in these cultural practices after minimal exposure, resulting in distortion of meaning. Examples are charging admission fees to a pipe ceremony (Chanupa), sensationalizing a Sun Dance, or using ancient praying songs in team cheering.

Jane aims to “become more tuned in with Indian matters in Maine (that is, the Passamaquoddy and the Penobscot), to speak to other white people about it, and to pray for guidance.” Gretchen said that what she learned in the course “will be useful in my job as a docent at our history museum. The Native American presence on Washington Island in Wisconsin is of interest to many visitors. Janice said that her Ventura, California, Group, feels “more prepared to speak up concerning white privilege and supporting Native American activities.”

Final Projects. A PowerPoint, two devotionals, and two art projects were the final projects chosen by some of these six learners in the Native American Religion and Spirituality course. Adib, as we learned above, planned to summarize his learnings in a PowerPoint presentation. Allison and her Ventura, California, Group planned a devotional to share “some of the writings, prayers, and music that we have gained through this course.” Janice, also part of the California Group, was more specific: “our immediate action . . . is to develop a devotional dedicated to the Water Protectors at Standing Rock. In the future we feel more prepared to speak up concerning white privilege and supporting Native America activities.” 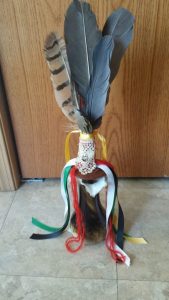 As for the two art projects: Kathryn made a fan to be used in smudging and in healing ceremonies. It includes hawk owl, and eagle feathers, as well as a bit of her grandmother’s lace, the Bahá’í symbol, a gold spider that came from her mother (a remembrance of the Spider Woman story), a silver pin of a figure reaching to the sky (a long-ago gift), the colors of the four directions, and some ribbon work.

Gretchen planned an art project that took several weeks longer than the course: “It is a fibers project based on the influence of nature. I am using a cloth that was left on a log with moss for several months. The wood and the moss reacted with the natural cloth producing several subtle but interesting colors. I am working on a fabric collage featuring this cloth enhancing it with stitching.”

We owe Paula Bidwell a debt of gratitude for her offer to the Wilmette Institute to start courses on Native American religion and spiritually. We are also grateful to her for her ability to inspire learners to speak up for First Nations and Native American peoples with more knowledge and more empathy. Surely the mention of the names of a handful of the many Native American tribes (the Passamaquody and Penobscot from Maine, the Lakota, Pottawatomie, and Oneida from Wisconsin, the Choctow from Oklahoma, and the Chumash and the Miwok from California) are bringing happiness to Paula’s always spiritual heart.

Native American Religion and Spirituality is being offered again from April 1 through May 18, 2017. Faculty will be Richard Hainsworth and Brian O’Flanagan (Paula’s husband).